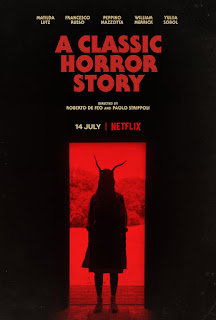 Screening at Taormina Film Fest 2021, which will be held from June 27th to July 3rd, before heading to Netflix on July 14th, watch the trailer for A Classic Horror Story...

Press Release
Five carpoolers travel in an RV to reach a common destination. Night falls and to avoid an animal carcass they crash into a tree. When they regain consciousness they find themselves in the middle of nowhere. The road they were traveling on has disappeared; now there is only a dense and impenetrable wood and a wooden house in the middle of a clearing. They will soon discover that it is the home of an unmentionable cult. How did they get there? What really happened after the accident? Who are the masked creatures depicted on the paintings in the house? Will they be able to trust each other to try and get out of the nightmare they have been trapped in?