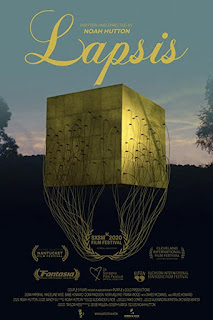 Coming to Digital platforms early next month thanks to Signature Entertainment, Ren Zelen leaps into Lapsis...


Lapsis is one of those rare indie films which succeeds as an engaging sci-fi narrative, while also working as a smart political critique of gig-worker economics and the fantasy of the ‘American dream’ of capitalism which allows exploitation to flourish.

Noah Hutton’s new film takes place in a possible near-future and highlights the way in which the gig economy and zero-hour contracts offer commitment-free employment but allow employers to get richer by avoiding the provision of job security or benefits, while publicly using ‘PR friendly’ ways of pushing productivity further. Thus, the gap between rich and poor continues to grow ever wider.

Playwright and filmmaker Dean Imperial stars as Ray, a middle-aged driver who is happy to muddle along in a mundane job delivering lost luggage, until he finds himself in need of some extra cash. The cash is necessary to cover the medical expenses of his younger brother Jamie (Babe Howard), who suffers from a chronic fatigue illness which regular medical insurance refuses to cover.

Ray is a simple soul who believes in the system which tells him that if you work hard and keep your head down, the system will treat you fairly. He also believes that an expensive clinic claiming to offer revolutionary ‘cures’ for people with chronic fatigue illness will be the best option for his brother.

In Ray’s world an upgrade to Quantum computing has become a necessity for most people so that they can receive important daily information. Ray hears about a part-time job stringing cables for a company called CLBR, a tech firm whose quantum computers need human beings to hike through difficult, wooded terrain to physically connect their expanding cable network to huge, imposing, silver cubes that power the technology. This supposedly high-paying, fast-money venture demands arduous physical effort on the part of the ‘cabler’.

Cablers have to physically drag a cart carrying the cable through wilderness terrain. New cablers are assigned ‘medallions’ to earn points on the basis of the time they take on each trail and thus they are able to progress gradually, being able to bid for more lucrative trails each time.

Each cabler is assigned an alias along with an indicator integrated within a smartphone that keeps track of their progress, but which also strictly allocates the time during which they can take rest breaks.

Ray arranges to receive a second-hand ‘medallion’ through a shady middleman called Felix, (James McDaniel), who demands part of his earnings in the deal. Soon Ray discovers that his medallion is already loaded with pre-earned points which lead him to rise through ranks quickly while his legitimate co-cablers must suffer through the slog of earning points through hard work in difficult conditions.

CLBR, the tech firm they’re working for, finds ways of increasing speed and productivity with the tracker/phone chirping out slogans of encouragement, such as "Challenge your status quo!" and "Continue your adventure!". However, if anyone pauses for an unscheduled breather, it shames the participant by repeatedly blaring "Rest denied!"

The cablers are also pitted them against small automated robots on the same routes who never get tired, sleep or stop for meal breaks, and who will do them out of their salaries if they get ahead of their human counterparts.

Ray is not tech savvy and is simply perplexed by something he doesn't understand. When he meets up with the more experienced and confident Anna (Madeline Wise) on one of his trails, his simple beliefs about the system come in conflict with her well researched and more informed standpoint on how the system actually works. His arguments about a ‘level playing field’ and ‘healthy competition’ are shattered when Anna confronts Ray about the ‘unearned’ advantages he has illegitimately obtained on his ‘pre-owned’ medallion.

As he chats to younger, more knowledgeable cablers, Ray begins to wonder about his preconceptions and realizes there is much he doesn’t understand about how the corporation controlling his fate functions and how it exploits its workforce. Slowly, he also begins to become suspicious about the kind of treatment his brother is receiving in his ‘special’ clinic and how this kind of pseudoscience may be geared to simply fleecing the vulnerable with false hopes of expensive ‘cures’.

Contact with the well-informed Anna and with other kinds of people is the catalyst for Ray getting an education about the realities of capitalism, and how the myth of the ‘American dream’ makes exploitation possible. He comes to understand the role that the workforce must play in securing proper labour rights for a fairer society.

Having said this, it must also be said that although Lapsis works as a social critique, it is successfully wrapped inside a well-paced and very watchable sci-fi parable. Writer-director Noah Hutton focusses on the character and a set of revelations that make up an intriguing story rather than the technology.

Hutton builds an entirely grounded world with a story which chugs along and keeps you watching. It is constantly inventive and imaginative, taking us along with Ray through his many tribulations in the forested areas during his cabling but also in the world outside when the dodgy Felix and CLBR both contend to make his situation more tangled.

Using a sci-fi metaphor Hutton provides an entertaining, often slightly comedic examination of issues that have current relevance. He is aided by Dean Imperial’s and Madeline Wise’s engaging and convincing performances as Ray and Anna who serve as are our guides through a world which parallels our own, where greedy corporations and governments create the impression of ‘fair’ competition in society to more easily take advantage of people who don’t want to look any deeper into the illusions they create.