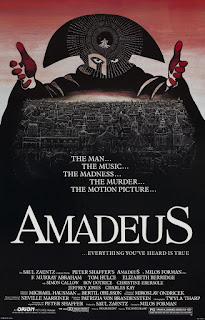 Fresh from a trip to Mozart’s house in Vienna [back in 2015 - Ed], I thought it would be interesting, once I returned to London, to revisit the acclaimed movie Amadeus, made in the 1980s. The story goes that when Milos Forman, the Czech-born director, heard about Peter Shaffer's stage production of Amadeus he was reluctant to attend, assuming that a play about Mozart might be dull and render the subject less interesting than his music. By the end of the evening, however, he was determined to turn Amadeus into a movie. With financing in place, Forman and Shaffer spent four months writing the screenplay, initially intending for the movie to focus more on Mozart (Tom Hulce) and less on his rival, Antonio Salieri (F. Murray Abraham). They also worked out how Mozart's compositions could be used, since the score would have to be an integral part of the story, and not just pieces inserted to point the audience to an emotional response.

As things transpired, Amadeus turned out to be a movie not so much about Mozart, although he was played flamboyantly by Tom Hulce. The most intriguing and complex character in Amadeus remained Antonio Salieri, played by F. Murray Abraham, who gave the performance of his career (and subsequently took home a Best Actor Oscar.)

The film's plot is largely fictional, with its earliest source in Alexander Pushkin's 1830 Mozart and Salieri. Desperate to devote his life to the creation of beautiful music, Salieri dedicates himself to God in the hope that he will be granted a gift and become a great composer. He determines to lead a pious and holy life – shunning sexual entanglements, avoiding drink, and devoting himself to the service of music and God. All seems to go well – he overcomes his humble background and by dint of hard work he becomes a court composer and a much sought after music teacher. 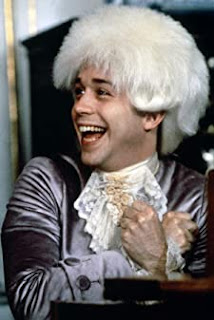 Although Salieri is a competent composer in his own right, he is also astute enough to recognize true genius when he encounters it, and in Mozart he hears a musician that has been truly blessed by God. He is intrigued to see this paragon in real life – he must be an angelic presence on the earth to be able to create such ethereal beauty in sound, even the translation of the composer's middle name, ‘Amadeus’ means ‘Beloved of God’, and fits in perfectly with Salieri's view that Mozart has been singled out by the Almighty.

His encounter with reality is like a slap in the face - Mozart appears to be nothing but a spoiled child in a man's body. Indeed, while he is a master of music, the other areas of his life are stalled in a state of arrested adolescence. Like many modern rock stars and celebrities, Mozart glides carelessly and selfishly through the world, expecting it to owe him a living and to conform to his needs, and spending money irresponsibly on a lavish and wasteful lifestyle. He also displays a streak of meanness that is born not so much out of malice or envy, but rather out of narcissism. To add insult to injury, unlike Salieri’s priestly self-denial, Mozart's existence has been one of excess and debauchery. God, with cruel unfairness in Salieri's eyes, has allowed an unworthy boor with neither discipline nor piety to create, without much apparent effort, music Salieri knows to be extraordinary. Despite all Salieri’s sacrifices, God has granted the unworthy Mozart his gift. Salieri cannot bear the injustice of this situation, and decides to fly in the face of what he perceives to be God’s will - he plots Mozart's death, all the while being tormented and transfixed by hearing the music of God in Mozart's art. It is this that lies at the root of his destructive impulse. Accordingly, Salieri's mission takes on ironic motive. He declares "I speak for all mediocrities in the world. I am their champion. I am their patron saint."

The first five minutes of Milos Forman's Director’s cut of Amadeus packs in more drama than some entire movies. The scene is Vienna, on a winter's night in the 1820s. As snow billows outside, from somewhere inside a grand apartment a man screams "Mozart! Forgive your assassin!" He is answered, first by a dismal chord from the last act of Don Giovanni, then by two servants, who are bringing the cream cakes they hope will placate him, but breaking the down the door they find their master has slit his throat, his blood is spattered across his white tunic. As he is carried out on a stretcher through the freezing streets he hears music and glances up at the windows of a ballroom. A dance is taking place - everything inside seems lively, warm and bright, but the old man Salieri, tormented and wretched – is being taken to a lunatic asylum. 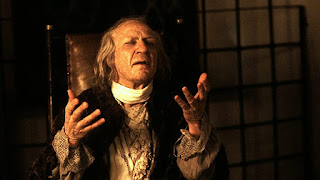 How better to tell a story of the frustration of mediocrity than by telling a story of a genius through the eyes of a mediocrity? In this way, Amadeus tackles two themes in our relationship with genius: the seeming arbitrariness of genius, which confronts the ordinary person by its inequity, while the art of a genius raises us all beyond our mundane existence. Most of us have been delighted or enlightened by some product of genius we don't fully comprehend. So, should genius be supressed because it's inegalitarian by nature, or elevated because it enlightens the common masses? The director Forman poses further questions, specifically, does the contribution that genius can make have the potential to save men from themselves and their worst impulses? At its heart, I think, Amadeus asserts that it does.

The original version of Amadeus used overlapping sound cues for a lively flow between scenes, and the new version breaks up some of that flow with lengthy, talky interludes. Still, Ondrícek's breathtaking images and Forman's essential craft shine through. The two leads, Abraham and Hulce, were both relative unknowns at the time of Amadeus' production because Forman insisted that viewers see the characters and not be distracted by famous actors that they recognized. Elizabeth Berridge (replacing Meg Tilley at the last minute after an injury) brings a combination of playfulness and steeliness to the part of Constanze, Mozart's wife. She shares many of her husband's juvenile qualities, but also has the head for business and a hard streak that he lacks. Roy Dotrice is Mozart's dour father, Leopold, who has devoted his entire life to his son, only to have it thrown back in his face, and the ever amusing Jeffrey Jones plays Emperor Joseph II as a superficial and self-absorbed ruler who can't tell the difference between a great opera and a mediocre one.

Movies about artists - painters, musicians, composers or authors are too often dull and unengaging (unless they’re by Ken Russell – when they appear rather like a fevered dream). Amadeus remains the exception, presenting us with high drama and two riveting characters.