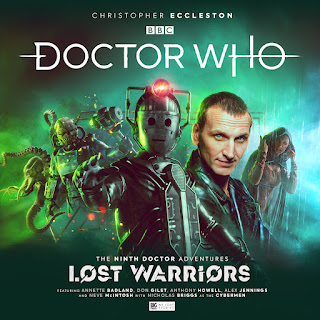 Join the hunt for lost warriors in a new Doctor Who: The Ninth Doctor Adventures box set, due for release in November 2021 from Big Finish Productions...

The next box set of three full cast audio adventures for Christopher Eccleston’s Ninth Doctor invites listeners to follow the TARDIS to a 1930s country mansion, the Scottish Highlands and an iconic movie set – where he runs into one very familiar face...

The Doctor meets many strangers on his travels. Some are destined to end up friends, while others were always going to become his enemies.

And some were once warriors, with reasons of their own to remain hidden from the

The three exciting new stories included in this volume are:

Christopher Eccleston said: “It’s just magical to me, to be playing a hero again. There’s a great positivity and optimism to the Doctor, and what Doctor Who can do with these audios by reaching out to those young hearts and minds, to those young imaginations – it's beautiful.”

Director Barnaby Edwards added: “It was a huge treat to be reunited with Christopher Eccleston, 16 years after we last worked together on Doctor Who. He had such energy and enthusiasm and inventive brilliance then – and he’s still got it now.

“These three stories see the Ninth Doctor, himself a lone veteran of a great war, encountering three other ‘lost warriors’. Each adventure works as an entirely separate entity with great plots, fun characters and surprising villains, but together they present a fascinating dialogue on how conflict can change a person. And that’s especially true of the Doctor himself.

“I love all three scripts. They’re so varied and so perfect for the Ninth Doctor. All are period pieces, which is an area where Chris’s very modern Doctor works so brilliantly, and all have a background of conflict, be it the aftershock of the First World War, the genesis of the Second World War or the innumerable battles in 11th-century Scotland. And, hey, where else could you find the Doctor encountering not only Macbeth and Lady Macbeth but also Fritz Lang?”

Doctor Who – The Ninth Doctor Adventures: Lost Warriors is now available for pre-order exclusively at the Big Finish website (www.bigfinish.com), from just £19.99. Big Finish listeners can save by ordering a bundle of the entire series for just £88 (as a collector’s edition box set) or £78 (as a download).