Comics - The ME Generation 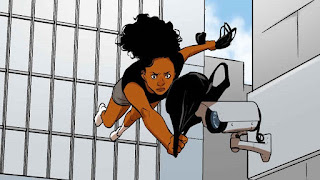 Chinbeard Books have just launched a Kickstarter for a new comics series that aims to turn the spotlight on invisible, and often maligned, chronic illness and raise some money for charity at the same time...

Inspired by the true-life experiences of ME sufferers around the world, The ME Generation seeks to tell a positive, life-affirming story of four sufferers from this most misunderstood of illnesses, who find themselves forming an unlikely superhero team.

People living with ME (myalgic encephalomyelitis) and CFS (chronic fatigue syndrome) are warriors who have had to battle with the life-changing affects of this debilitating condition whilst simultaneously fighting the medical establishment to recognise and treat their suffering.

The ME Generation seeks to celebrate their on-going struggle, offer hope and entertainment through a fantastic comic-book adventure, and ultimately raise money for vital research into the causes of ME and to fund the development of new treatments for the condition.

Conceived by actor/writer/director/producer Barnaby Eaton-Jones (The Goodies, Robin of Sherwood, Passport To Oblivion, Running To Stand Still), who has battled ME himself for nearly 30 years, the initial idea for the comic came from Barnaby’s own experiences, and with characters originally based on four female friends of his; who have their own ME stories to tell.

The ME Generation is planned as a four issue comic book series (each issue will be 22 pages long), to be collected and published ultimately as a graphic novel with some extra content. 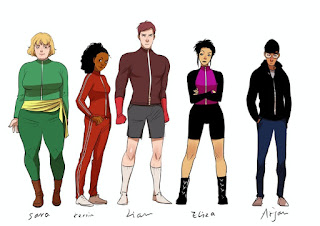 Written by veteran TV scriptwriter and novelist Colin Brake (EastEnders, Bugs, Doctors, Doctor Who, Dan Dare), the ME Generation tells the story of Sara, Kerrin, Liam, and Eliza - all dealing with their own personal ME hell.

Offered the chance of a new, radical, and experimental therapy four of them find themselves enhanced with incredible superpowers and thrust into danger.

With the Doctor who transformed them killed in an accident by secret agents trying to shut down his practice, and their superpowers running out-of-control, our four heroes, aided by their tech-savvy friend Arjan, have to uncover the truth about what has happened to them… and why.

With thrilling action, appealing and relatable characters, a good dose of wit and even a touch of satire, The ME Generation tells a story shot through with mystery, conspiracy, and unexpected twists.

“I’m just a few months older than Spider-Man,” says The ME Generation scribe Colin Brake, “and I’ve been a comic-book reader for, gulp, about 50 years! I can’t wait to share these great characters and their awesome, funny and thrilling adventure with an audience and, of course, raise awareness of this terrible illness.”

"I love that we are using this comic to raise awareness of Myalgic Encephalomyelitis!" says The ME Generation illustrator Yishan Li, "It's a story full of adventure, actions and hope. Let's go on the journey together!"

"I'm aware of how the media and the world has focused in on chronic illness, with the appearance of the 'Long Covid' strain of the pandemic we're living through." says The ME Generation originator Barnaby Eaton-Jones (taking on the Stan Lee role, as it were!). "It couldn't be more timely, as research continues to find the markers, to bring out this graphic novel which seeks to entertain first and foremost - giving sufferers some excitement and adventure, that could well be sadly missing because of the severity of their condition. I hope this connects with sufferers, non-sufferers, and comic book fans alike. It's a tale that I wanted to tell and I'm really very happy that Colin and Yishan will be telling it for me."

Each issue will be funded by a separate Kickstarter campaign and this Kickstarter is for the first one, although you can pledge for all four chapters together as one of the perks, as well as getting each issue separately in either paperback or digital download, and Issue One should be ready to publish as an e-comic and print edition later this year.
Images - Yishan Li/Chinbeard Books
Please support The ME Generation Kickstarter here.
Email ThisBlogThis!Share to TwitterShare to Facebook