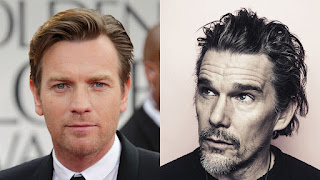 Apple Original Films have announced Raymond and Ray, a new feature film set to be produced by Apple Studios starring Ewan McGregor and Ethan Hawke, and written and directed by Rodrigo García (In Treatment, Albert Nobbs).

Raymond and Ray follows half-brothers Raymond (played by Ewan McGregor) and Ray (played by Ethan Hawke) who have lived in the shadow of a terrible father. Somehow, they still each have a sense of humor, and his funeral is a chance for them to reinvent themselves. There’s anger, there’s pain, there’s folly, there might be love, and there’s definitely grave-digging.

Apple TV+ is available on the Apple TV app in over 100 countries and regions, on over 1 billion screens, including iPhone, iPad, Apple TV, Mac, popular smart TVs from Samsung, LG, Sony, VIZIO, TCL and others, Roku and Amazon Fire TV devices, Chromecast with Google TV, PlayStation and Xbox gaming consoles, and at tv.apple.com, for $4.99 per month with a seven-day free trial. For a limited time, customers who purchase and activate a new iPhone, iPad, Apple TV, Mac or iPod touch can enjoy three months of Apple TV+ for free.*

For more information, visit apple.com/tvpr and see the full list of supported devices.

*Special offer is good for three months after the first activation of the eligible device. One offer per Family Sharing group. Plans automatically renew until cancelled. Other restrictions and terms apply; visit apple.com/promo for more information.
Image - Apple TV+
Email ThisBlogThis!Share to TwitterShare to Facebook