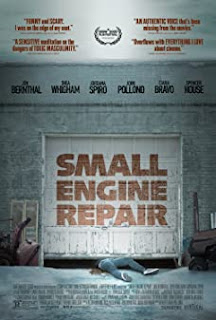 Coming to cinemas in the US next month after a successful film festival run, watch the trailer for Small Engine Repair...

Frank (John Pollono), Swaino (Jon Bernthal) and Packie (Shea Whigham) are lifelong friends who share a love of the Red Sox, rowdy bars and Frank’s teenaged daughter Crystal (Ciara Bravo). But when Frank invites his pals to a whiskey-fuelled evening and asks them to do a favour on behalf of the brash young woman they all adore, events spin wildly out of control.

Directed by John Pollono and based on his own award-winning play [with some of the original theatre cast and crew still involved in the film - Ed], Small Engine Repair is a pitch-black comedic drama with a wicked twist, and a powerful exploration of brotherhood, class struggle and toxic masculinity.
Image - Vertical Entertainment
Email ThisBlogThis!Share to TwitterShare to Facebook