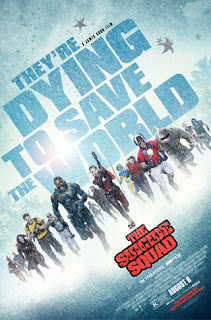 I can’t not talk about David Ayer’s 2016 Suicide Squad when talking about James Gunn’s The Suicide Squad. However, it’s been made clear by David Ayer that the 2016 Suicide squad movie is not his, but in fact more of a “studio cut”, so anything I say about the 2016 film is not a fault of his but rather of those running the studio at the time.

In The Suicide Squad we mainly follow Bloodsport (Idris Elba), a hired mercenary with an unhealthy relationship with his daughter. That’s one of the things that makes Bloodsport different to Deadshot (played in the 2016 film by Will Smith) I guess, because apart from this trait, Bloodsport pretty much seems like a second attempt at Deadshot, which isn’t a bad thing because Bloodsport is done very well. When you’re introduced to Bloodsport you already see something of a man who doesn’t necessarily want to be the bad guy, as he refuses to join Amanda Waller’s Suicide Squad until his daughter’s safety is threatened. That’s just an introduction to the character growth that we didn’t get with Deadshot in the 2016 Suicide Squad, as Bloodsport learns the impact that a loving father can have on a child through how it shapes Ratcatcher 2.

Ratcatcher 2 (Daniela Melchior) was one of the reasons I loved watching the film with my sister, because as someone who loves all animals and also loves to “sleep in” (her words not mine) my sister felt that she related to her a lot. Ratcatcher certainly gave off a vibe of someone who had a Robin Hood complex, where she and her rats would take from the rich to survive in a world where her and her creatures felt neglected. Maybe that was needed in the 2016 Suicide Squad, a character who was more vulnerable, but was also enough of a criminal for the rest of the squad to relate to her. That’s also what makes it bittersweet as she starts to feel like she isn’t neglected when she connects with other members of the squad.

And it wasn’t just Ratcatcher 2 who had vulnerabilities, as I mentioned in his own way Bloodsport cares for his daughter, but alternatively Polka-Dot Man (David Dastmalchian) has his unnerving hatred of his mother. Whilst it does make for brilliant comedy in the film, he also has a compelling backstory as to why he hates his mum, I won’t mention that backstory here but it’s nice that he too feels a sense of belonging in the group. 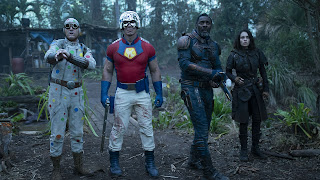 With King Shark I honestly never thought I’d feel bad for him after seeing him tear a man in half in the trailer, but somehow James Gunn (and Sylvester Stallone, the voice of shark) pulls it off. Shark talks about the fact that he doesn’t have any friends and so to begin with, doesn’t really care for anyone, but when Ratcatcher and her animal loving nature connects with him, he opens up in a strangely fun and child-like manner.

These are just some of the many compelling characters in the movie, which is already an incredible accomplishment considering how overcrowded the cast for this film seemed to be. Though with well-known characters like Harley Quinn (Margot Robbie) and Colonel Flag (Joel Kinnaman) for example, Gunn clearly knew that the newer characters needed the most time/development for the audience to resonate with them. We’ve already seen enough of Harley Quinn to like her, and I think her connection with Flag from the 2016 Suicide Squad was one of the few relationships in that movie that I remember fondly. It’s a nice idea to use that as a loose connection to the first film, as it acknowledges one of the better aspects of it.

The music was brilliant. Just like Guardians of the Galaxy, the film had music that was well associated with specific characters, such as Ratcatcher having a theme associated with the rats and her father or King Shark and his fascination with finding underwater creatures like him (that also had a slightly creepy vibe to it). Again, these theme songs really help us care about the characters, or at least feel sorry for them.

Combine the music with cinematography and the action sequences are also incredible, from a fight sequence shot through the reflection of Peacemaker’s helmet, to a continuous shot that follows one member jumping out of a plane and then dropping underwater, the film clearly is trying to either throw you into the action or tell you something through how he’s placed the shot. He even employs slow motion in moments that are too perfect not to, it made me think of Zack Snyder in how one scene shows bullets moving in slow motion, only the stakes are so high in the moment that you can’t stop watching.

I think James Gunn was the perfect choice for a film where an extra-terrestrial starfish was the “big bad”, as we’ve seen him pull off a raccoon and a talking tree and he’s the only one I could imagine making it work. Not only did he make it work but he threw in some great characters, impressive action sequences and interesting alternative villains. If you had doubts about revisiting the Suicide Squad franchise (as I did) then try setting them aside, and I strongly believe you won’t be disappointed.
Follow Kraig on Twitter @kraigandhismac
Images - DC
Email ThisBlogThis!Share to TwitterShare to Facebook