TV - Marvel Studios’ What If…? 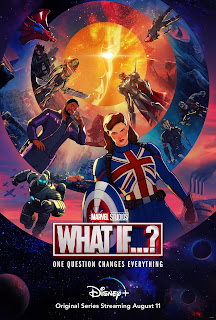 Find out a little more about Marvel Studios' What If...? series which debuts on Disney+ on Wednesday 11th August...

Marvel Studios’ What If…? flips the script on the Marvel Cinematic Universe, reimagining famous events from the films in unexpected ways. Creating a multiverse of infinite possibilities, “What If… ?” features fan-favourite characters, including Peggy Carter, T’Challa, Doctor Strange, Killmonger, Thor and more.

Debuting exclusively on Disney+ on Wednesday, What If… ? features of voice of Jeffrey Wright as The Watcher. Marvel Studios’ first-ever animated series also features the voices of a host of stars* who reprise their iconic roles in the MCU—though their characters’ journeys promise to be wildly unique.

“It’s an anthology,” says executive producer Brad Winderbaum. “The Watcher introduces us each week to these alternate storylines— each a kind of cautionary tale in the spirit of ‘The Twilight Zone.’ We bounce around genres and tone—some episodes will be dramatic; some will be tragic or comedic.” Marvel Studios veteran Bryan Andrews was called on to helm the series. “He’s boarded many of our major action sequences over the years,” says Winderbaum. “He’s an animation director and has been behind some of the best animated shows, ‘Samurai Jack,’ ‘Sym-Bionic Titan’ and the original ‘Star Wars: Clone Wars.’

“At the same time, my kids were watching Guillermo Del Toro’s ‘Trollhunters’ on Netflix,” continues Winderbaum. “AC Bradley, the writer on that show, had come in to pitch for ‘Captain Marvel,’ which didn’t work out due to some other obligations, and producer Jonathan Schwartz recommended her for ‘What If…?’ We brought her in and she understood what we wanted to do immediately. She came back and pitched this emotional character-focused version of the Captain Carter story.”

For Andrews, the opportunity allowed him to summon everything he knew about animation, the MCU and storytelling. “We’d get together and basically nerd out,” says the director. “We had an embarrassment of riches in terms of characters, storylines, twists—the sky’s the limit, really.”

Bradley, who knew she wanted to write for Marvel Studios the day she saw “Iron Man,” says narrowing down which stories to do was the hardest part. “We looked at the big moments of the MCU and thought about ways to twist them—that’s where we started,” she says. “We came up with 30 loglines and pitched them to Kevin Feige. He picked 25 of them. That was big, because we knew we were on the right track. But then we had to narrow it down more, and eventually found our season.”

Inspired by Marvel Comics’ “What If…?” comic book anthology series, which debuted in 1977, the new animated series introduces new scenarios based on characters from the vast world of the MCU, which launched in 2008 with “Iron Man.” “That gave us a broader brush to paint with, so to speak,” says Andrews. “It's an immediate in to a massive audience, many of whom aren’t familiar with the comics, but just loved the movies.”

According to Andrews, the look of the series is illustrative. “We reached back in time and looked at classic American illustrators,” says the director. “There’s a certain kind of heroic, hyper-realized, super-idealized look that feels iconic. There’s a style to it but it’s not pushed or cartoony.”