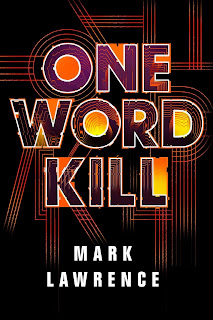 Synchronicity Films is co-producing a new YA scripted series One Word Kill with Erik Barmack’s Wild Sheep, the LA-based production company set up last year by the former Netflix VP of Original Series...

Acclaimed writer Holly Phillips is on board the project to adapt the trilogy of books of the same name, written by best-selling British-American fantasy writer Mark Lawrence, into a YA returnable series. The books have been billed as Ready Player One meets Stranger Things, with fantasy legend George R.R. Martin saying he “enjoyed the hell out of One Word Kill”.

One Word Kill begins when fifteen-year-old boy-genius Nick Hayes discovers he’s dying. And it isn’t even the strangest thing to happen to him that week. Nick and his Dungeons & Dragons-playing friends are used to living in their imaginations, but when a new girl, Mia, joins the group and reality becomes weirder than the fantasy world they visit in their weekly games, none of them are prepared for what comes next.

A strange – yet curiously familiar – man is following Nick, with abilities that just shouldn’t exist. And this man bears a cryptic message: Mia is in grave danger, though she doesn’t know it yet. She needs Nick’s help…now. He finds himself in a race against time to unravel an impossible mystery and save the girl. And all that stands in his way is a probably terminal disease, a knife-wielding maniac and the laws of Physics. Challenge accepted.

Erik Barmack said: “Claire and her team are experts at producing drama that is watched around the world. I couldn't be more thrilled to be partnering with her and Mark on this unique YA project.”

Claire Mundell added: “Erik’s understanding of the global scripted marketplace is second to none, and we are genuinely thrilled to be working with him to bring Mark’s addictive book trilogy to the screen. This story has it all: fantasy, high stakes, romance – and Dungeons and Dragons. With her incredible track record of creating award-winning shows, Holly is the perfect writer to adapt these fantasy novels for a YA audience.”

Holly Phillips added: “One Word Kill captures the joy and the messiness of being a teenager. It's about finding your tribe and the sacrifices you'll make for them once you've found them. I can't wait to bring it to life.”

Mark Lawrence is an American-British novelist who wrote The Broken Empire trilogy of fantasy books. In 2014, Lawrence won the David Gemmell Legend Awards for best novel for Emperor of Thorns. He operates the annual Self-Published Fantasy Blog-Off.

Holly Phillips is best known for creating and showrunning teen series Get Even for BBC iPlayer and Netflix, based on the novel by Gretchen McNeil. She also served as lead writer and creator of BAFTA and RTS-nominated series The Athena for Sky, currently airing on Amazon Prime in the US. Holly wrote and created the original series Nearly Famous for E4 and was on the writing team for BAFTA-nominated Sugar Rush. Other credits include Dance Academy 2 which won a LOGIE and an AWGIE, Millie Inbetween and Scandi Noir Trapped.