Audio - Missy and the Monk 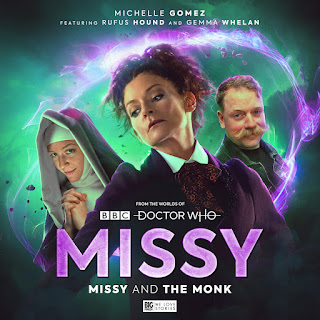 There’s triple the fun for the Master’s most madcap and mischievous incarnation in a brand new box set of three full cast audio adventures, out now from Big Finish Productions...
Press Release

Missy… no longer alone, unleashed and unfettered! She’s stuck with a Meddling Monk, in a TARDIS that won’t fly without both pilots.

The two Time Lords must learn to live together, or die trying…

Producer David Richardson said: “It was kind of inevitable. After being paired for an episode in the first box set of Missy and then for another in the second, we just couldn’t resist! The idea of giving Missy and the Monk a whole box set to spar with each other was simply perfection.

“They’re such brilliantly mismatched characters, played so sublimely by two actors with impeccable comic skills. I howled with laughter when reading the scripts, and then did so all over again as Michelle Gomez and Rufus Hound worked their magic on them.

“What could be better? Well, perhaps a nun! Enter Gemma Whelan as the Meddling Nun, returning after her standout turn in Dalek Universe 1, adding a delicious extra slice of mayhem to the proceedings. They just make me so happy!”

Missy and the Monk is now available as a collector’s edition box set (on CD for just £24.99) or a digital download (for just £19.99), exclusively at www.bigfinish.com

Please note that Big Finish is currently operating a digital-first release schedule. The mail-out of collector’s edition CDs and limited edition vinyl LPs may be delayed due to factors beyond our control, but all purchases of this release unlock a digital copy that can be immediately downloaded or played on the Big Finish app from the release date.
Email ThisBlogThis!Share to TwitterShare to Facebook