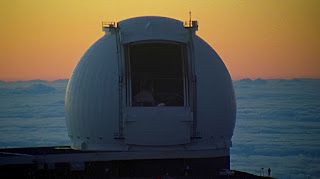 Rock Bottom Riser centres around a plan to build The Thirty Metre Telescope on Mauna Kea. Well, that’s all good isn’t it. Bring on the science. However, Mauna Kea is one of the most sacred sites in native Hawaiian culture. So, this isn’t just science it is colonialism in action. Hawaii has a resource that a colonial power can exploit so the beliefs of the natives are, of course, not worth worrying about. I’m sure no one developing the Thirty Metre Telescope would say in direct terms that science trumps the primitive beliefs of a small number of people, but that is the implication of what is happening.

Fern Silva’s film doesn’t go directly on the attack about this though. He uses his film to tell the story of Hawaii: its geology, its history, the arrival of colonialism and Christianity, its culture, and its ecology. Hawaii is an isolated set of Islands out it the Pacific. It was first settled probably 1,400 years ago by sailors from Tahiti. It’s a beautiful place.

Silva could probably have made a strong film with just the images. Lava is a terrifying thing to watch. I don’t know whether it is the hints at an entrance into hell or just the fact that it looks some implacable, patient and… well… alive. But the imagery is powerful backed up by a soundscape that gets under your skin. Sometimes it sounds like 2001: A Space Odyssey. It’s immersive.

There’s music too. There’s a small section that revolves around listening to Simon & Garfunkel’s ‘I Am a Rock’, which is being taught in a classroom as poetry. I won’t dwell on that. What is interesting is how much the lyrics of ‘I Am a Rock’ could be referring to Hawaii. There’s a line from that song that is “And an Island never cries.” And I thought. Well, if you treat lava as tears then Hawaii cries constantly. I might be overthinking that, but it works for me.

I really liked this. I wish I could have seen it on a big screen with a cinema sound system. It’s polemical without being shouty. It connects things – native navigation techniques and the stars; the telescope; native navigation techniques and SETI. Indeed, the section at SETI, in the context of this film makes it sound like another phase of colonialism: we’re going to find potential planets to settle and head off into the stars and settle on new worlds. We’re not giving much thought to what happens when we get there or what we might do if there is life there already. But that’s a whole other story.

Absolutely worth an hour and ten minutes of your time.