Documentary - There Are Not Thirty-Six Ways... 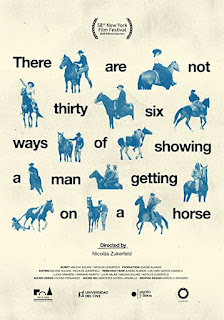 Showing recently at Open City Documentary Festival, Tony Cross discovers There Are Not Thirty-Six Ways of Showing a Man Getting on a Horse...

There Are Not Thirty-Six Ways of Showing a Man Getting on a Horse is an interesting exercise. Directed by Nicolás Zukerfeld. I deliberately avoided reading much about it apart from the basic information.

So, based on the title the first chapter of the film, which is a series of clips from old films, seems perfectly designed to demonstrate that there are more than thirty-six ways of showing a man getting on a horse. Or walking through a door. Or shooting a gun. Or watching from the shadows. The clips sometimes seem random, but sometimes they connect to others as if they are part of a larger film. Sometimes they are funny. And there is something incongruous about the appearance of Kenneth Moore amongst a sea of American actors (from The Sheriff of Fractured Jaw).

Chapter Two makes clear about what is going on. The films title is a quote from the director Raoul Walsh. Chapter Two is a professor of films quest to find the original source of the quote. It’s a brilliant piece of detective work involving little in the way of actual images, except of old issues of film magazines, books, and notebooks. I loved this. It’s the sort of Quixotic quest that I can utterly relate to. This and Chapter Three demonstrate that not everything can be relied upon. There are mis-translations, elisions, and improvements on original quotes.

Then as you run through the credits you realise that all the clips in Chapter One come from films directed by Raoul Walsh, which explains some of the dodgy quality of some of them. Walsh directed 150+ films from 1913 to 1964. He directed shorts, silent, and sound.

A brief aside: he directed Objective Burma! starring Errol Flynn (an actor he seemed to use a lot.) If you are not aware of it, you should have a look at how badly the film was received in the UK. It makes the controversy over U-571 look positively mild.

Anyway, let’s get back on track. What director Nicolás Zukerfeld has done here is make a film criticism as a film itself. I found it fascinating, but I am not sure it is quite a spectacular achievement as it might have been if, for the last few years, people had not been producing long-form critical essays on YouTube. This didn’t feel cinematic. Despite the film clips.

One of my over-used expressions in reviews is ‘damning with faint praise.’ Perhaps that’s what I’m doing, but I really enjoyed it and, in the end, what more do you want from a film?