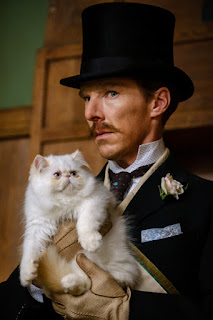 The cat's out of the bag - The Electrical Life of Louis Wain is coming soon. Watch the trailer...

An eccentric artist (Benedict Cumberbatch) introduces Victorian London to the delights of cats, in Will Sharpe’s enlightening biopic.

The Electrical Life of Louis Wain tells the story of the Victorian-era artist whose widely published drawings of wide-eyed anthropomorphized cats transformed them from mysterious to irresistible. To support his widowed mother and five younger sisters, the academy-trained artist sells drawings of animals from the country fair. His skilled and speedy portraiture impresses, but his often stormy view of the world and those in it keeps him from engaging much with society. That is, until he hires a kind, curious governess for his youngest sisters, Emily Richardson (Claire Foy), who illuminates his life in a way even he’d never imagined. Love blooms across the class divide — albeit to the chagrin of Louis’s stern sister Caroline (Andrea Riseborough), second oldest and second in command.

Premiering at Telluride Film Festival last night before coming to Toronto International Film Festival as one of their Gala Presentations, The Electrical Life of Louis Wain heads for cinemas in the US and Amazon Prime Video later this month before heading to the UK later in the year.
Info from TIFF, Image from Studiocanal
Email ThisBlogThis!Share to TwitterShare to Facebook