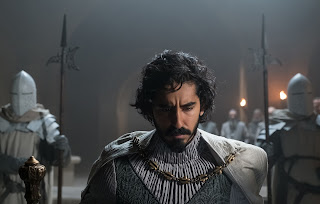 If you have a DVD/Blu-Ray player that can play Region 1 discs - The Green Knight will be available on 4K Ultra HD, Blu-ray and DVD from October 12th, thanks to Lionsgate. Watch the trailer...

From visionary filmmaker David Lowery comes a fresh and bold spin on a classic tale from the Knights of the Round Table.

An epic fantasy-adventure based on the timeless Arthurian legend, The Green Knight tells the story of Sir Gawain (Dev Patel), King Arthur’s reckless and headstrong nephew, who embarks on a daring quest to confront the eponymous Green Knight, a gigantic emerald-skinned stranger and tester of men. Gawain contends with ghosts, giants, thieves, and schemers in what becomes a deeper journey to define his character while proving his worth in the eyes of his family and kingdom by facing the ultimate challenger.