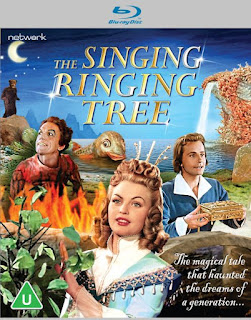 That VERY odd classic tale, The Singing Ringing Tree, comes to Blu-ray next month, thanks to Network...
Press Release

A surreal fairytale featuring the world's first communist princess, a bizarre fish and a malevolent dwarf that haunted the nightmares of generations of children from the mid-'60s onwards, The Singing Ringing Tree is presented here in high definition for the first time.

To win the love of a beautiful but arrogant princess, a prince must find The Singing Ringing Tree. His quest leads him to a magical garden ruled by an evil dwarf, who allows the prince to take the tree on condition he wins the princess' love before sunset. If he fails, the prince will be transformed into a bear!

Based on a story by The Brothers Grimm, fantasy masterpiece The Singing Ringing Tree was a sensation on its 1957 theatrical release in East Germany, which seared itself on the imaginations of a generation of UK youth after its BBC transmission in December 1964.

[Here's a little reminder of that fish - Ed]