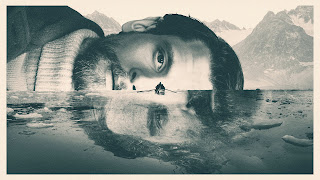 With the new BBC adaptation of The North Water starting on Friday, read an interview with the series writer and director, Andrew Haigh...

1859. Patrick Sumner joins The Volunteer as a ship’s surgeon, hoping to lose himself in the tough physicality of an Arctic whaling trip. But the ferocity of the elements is matched by the violence of his crew mates, with Drax, a harpooner, a distinctly brutal force of nature.

As the true purpose of the expedition becomes clear, confrontation between the two men erupts - taking them on a journey far from solid ground and way beyond the safe moorings of civilisation.

Adapted and directed by Andrew Haigh, the series is based on the book by English author and academic Ian McGuire, which was longlisted for the Man Booker Prize. Much of the shoot took place north of the Svalbard Archipelago, the cast and crew working entirely offshore in the Arctic Ocean.
The series stars Jack O'Connell, Colin Farrell, Stephen Graham, Tom Courtenay, Sam Spruell and Peter Mullan.
The five part drama series starts on BBC Two on Friday 10th September at 9:30pm.

Why did you want to be a part of adapting and creating The North Water?

I was working on another project when See-Saw sent me the book. On reading the first 20 pages, I thought, I want to do this, I have to do this. There was something incredibly special about it in that it’s a historical drama, a thriller, but really it seems to say something very important about the nature of what drives us as human beings, as individuals, as people.

How did you go about adapting the book?

As with any adaptation, you want to approach it with care and consideration, and try to understand what the author was trying to say. Then it is about articulating that in a way that makes sense for the screen.

How did you develop the characters?

What is the story about?

This is a story about the world in chaos. It is about men fighting, struggling, controlling, exerting their dominance over nature, over each other, all the things that create the chaos in the world. We only have to look around us today to see that we haven’t changed that much since the 1850s. Telling a story like this almost allows us to reflect on what is happening today through those themes of the past. For me, good historical drama always reflects something about the present, and The North Water certainly does that.

What is the difference between Drax and Sumner?

I feel that Drax and Sumner are essentially two sides of the same coin. One is a person who lives through instinct (Drax) and the other lives through using his intellect. I certainly see Drax as the shadow of Sumner in many respects; he is what Sumner is trying to repress and hide and keep secret. 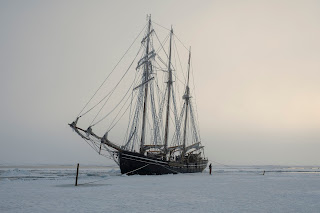 Why did you decide to shoot in the Arctic?

We were up to 81 degrees north, 24 hours away from land at some points, locked in the sea ice. It was not an easy experience. It was very cold, sometimes terrifying, and really challenging, but to me that was what was so exciting about it. Luckily, we had a bunch of crew and actors who also thought this was exciting, so we could all do it together.

I was terrified. I think we all were. None of us really knew what to expect. I’d been on some scouts up there, so I had seen the environment already, but it was nerve-racking to know that we were going to be on a boat for a month, all the crew, all the cast, in very close quarters. It was a big cast and I wanted to ensure that everyone got on, that it was an enjoyable experience, and in the end, what made me very happy was that it was such an incredible experience for all of us.

You feel very privileged to be in that environment and that part of the world. We had very few days off in the Arctic, but you’d go on to the deck and see a family of polar bears climbing across the ice - that doesn’t happen every day. And I like a challenge I suppose, I knew that it would be challenging, and that brings an energy to what you’re filming.

How did you cast The North Water?

What I found really fascinating about the novel is that this is not a story about explorers, it’s not naval officers heading off to search for the North-West Passage, it is working men - not upper-class men, who these stories are usually about - on a whaling ship, which is, essentially, a floating factory. These are men leaving their homes and going out to search for whale blubber. It is their way of making money, it’s their income but it is also their purpose, they take pride in their work. I thought that was really interesting.

All of the actors felt right for that world, they are what these characters are. They are tough, strong men, and in many ways, this is a story about men. It was interesting to me to see a dynamic of all these men together. They are brutal and violent but they are also compassionate and kind, they are all of those things. 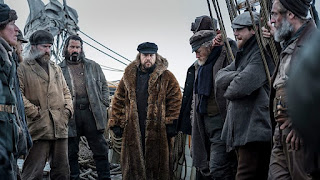 How was the working environment?

To be honest, the actors felt like the men on the ship. They were in close quarters, everyone had dinner and breakfast together, everyone was there together and there was no escape. By the end everyone was desperate to get off that ship, let’s face it. No internet, no phones, nothing. To have none of that for a month was actually quite special, and I think the actors loved it. It was great that we shot all the Arctic scenes first. That allowed those actors to bond and they are amazing actors. Despite all the stress and anxiety, I was really happy. It was a pretty incredible experience.

The actors astounded me in how they took to the environment, how they embraced it. I am throwing Colin Farrell on to a rowboat in the sea as huge chunks of ice crash against him. Or Jack is running across an ice floe jumping over a crack. This was a really difficult environment to work in, and it was very very cold.


What were the challenges?

It was difficult. There were some really challenging moments. You’re with a Steadicam trying to follow someone across the ice. At one point later on we were on this island in the middle of this glacial inlet and it was a really hard condition to work in. It was very difficult, but the crew completely embraced it. Every morning you were up at five o’clock, you were on tiny speedboats going across the ice to join the main ship that we were filming on, climbing aboard in these immersion suits.


What did the background research involve?

It was a long process. The book is very well written, so it has so much detail, and I did a lot of research on whaling, on sealing, on the whaling industry as a whole, but also, all your departments, your production designer, your costume designer, the amount of work that they put in to really nail down the detail. Obviously, the sets, we built the inside of some of the ship, we built Hull, we did all these things and the detail was fundamentally important to me. It takes a lot of time and a lot of energy. It is quite hard to do period well, I’ve never done period before, a lot of energy goes into it.


How did the actors become the characters?

I am always looking for complexity in the actors. I want my characters to be complex. I don’t want them to be clear-cut or for the audience to always understand what that character is going through at every moment along the way. Jack and Colin are really interesting actors. Putting them together was a really good combination. 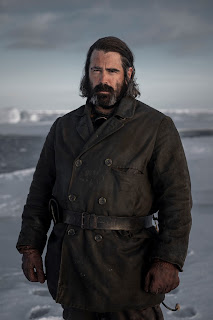 How did Colin Farrell approach the role of Drax?

Colin did a lot of bulking up. He ate so much food and he worked out for ages to create Drax’s physicality, which is very clear in the book. Drax is this huge beast of a man. It’s not about having lots of muscles or being strong, he’s just this animal. Colin spent a long time trying to physically become that person.


What sets the show apart?

What sets this apart is that it doesn’t exist within one genre. It is a historical drama, a thriller, an adventure story, it is a lot of things in one, which is why I find it so interesting.

Also shooting in that environment sets it apart. We are not relying on special effects or visual effects. We are really there. It is a challenging piece of work, the book is very challenging to read, if anyone’s read the book. It’s not an easy subject matter. It is brutal, it’s terrifying, it’s also filled with moments of compassion.

The North Water is unlike anything else that I have seen on television. It is a different version of stories that have been told before, a more complex version, and it says a lot about where we are right now, how we exist in the world, how we live in the world, how we are destroying the world around us, how we are letting greed overtake us. This is a story about the few and the privileged exerting their power and dominance over everyone else for their own gain. It is a very contemporary story as well as being a thriller and a drama and a character study.

Those things together, something that has a political resonance and has something to say about the way we live today, but also is still a fantastic story, are what sets it apart.
Images - BBC/See-Saw Films/Nick Wall
Email ThisBlogThis!Share to TwitterShare to Facebook