Animation - Argh & The Quest for the Golden Dragon Skull 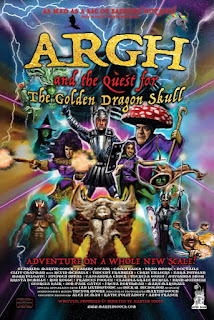 Argh & The Quest for the Golden Dragon Skull, the new animated project from award-winning director Martin Gooch, is set to be launched at London's MCM Comic-con this weekend...
Press Release

Famed adventurer, Lord Argh, is sent on a quest to find the legendary Golden Dragon Skull by mushroom obsessed King Kevin, ruler of Mushroomia. Travelling with his faithful squire Sally, the beautiful Amazonia, and the vile Slimeball The Snail, the unlikely questers must work together to overcome many adventures, trials and tribulations. Will they all return with the skull and save the kingdom of Mushroomia?

The past couple of years have been a trying time for filmmakers, but the passion for creation did not stop Martin Gooch, who decided "if you can't go big - go small." Following a meeting with US Producer Alex Le May, the award winning director Martin Gooch decided to shoot an entire movie in miniature inside his London flat.
After writing an epic feature film script which crosses deserts, jungles, deep dungeons and snow capped mountains, he then contacted many actors he had worked with previously and a few he had met on the festival circuit with his previous film Atomic Apocalypse. He said, "I sent them the script and we had a Zoom read through which was really great." Because of Covid restrictions, he asked the cast to self-tape their own lines and even made a short film for the actors giving them direction, because he couldn't be there in person to oversee the shoot.
Martin then started building sets and creating the locations for his fantasy adventure film, "It's just like Peter Jackson shooting Lord of the Rings, but instead of visiting many amazing locations, I just imagined them and built them on my dining room table. Sadly I didn't get to go to New Zealand, though." 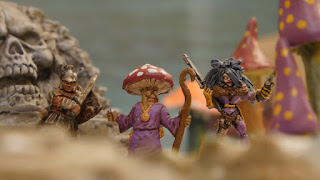 In total, 25 actors sent in their voice tapes between July and September from across the UK, New York, Los Angeles, Arizona, Montana and Vancouver. The impressive cast includes Kevin McNally (Pirates of the Carribean), Sarine Sofair (Game of Thrones), Chris Villiers (Top Secret), Brad Moore (Gloves off), Dee Tails (Star Wars), Cassandra Ebner (The 100), Emily Haigh (Arthur & Merlin) and Vincent Franklin (The Thick of It), Cliff Chapman (Audible's Sandman and Alien III) as well as legendary Games designer Ian Livingstone, who plays his own creation the Shape Changer from the Fighting Fantasy gamebook The Forest of Doom.
Martin spent 25 days shooting the model part of the film literally from his own dining room table - much to the annoyance of his girlfriend. "On a usual set you'd have a Director of Photography, a Camera Operator, an Art Director, Props Master etc, but on Argh I do everything, so it can be quite a head scratcher thinking how to construct the set and work out how to shoot it. As all the 'actors' are 25mm metal models, depth of field is, often, only an eighth of an inch, which makes it very fiddly!"

He added "It just goes to show what can he accomplished from home if you quite simply knuckle down and get on with it. Yes I'd love to be back on set in a studio but, for the time being, the world of Argh has been quite a diversion, and has given me the opportunity to work with some amazing talent." 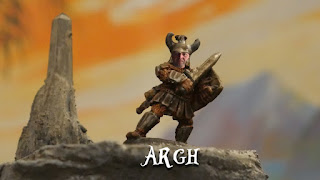 Argh & The Quest for the Golden Dragon Skull will be launched at a special Sneak Preview panel at MCM London on Saturday 23rd October at 11:30 AM. For in-person tickets and more information about how to watch the panels online, visit the MCM London website.
Images - courtesy Martin Gooch, Gothic Manor
Email ThisBlogThis!Share to TwitterShare to Facebook