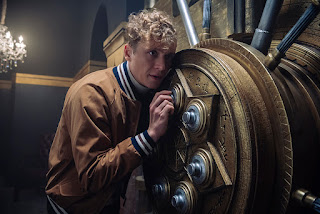 With Army of Thieves on Netflix from today, read a short Q&A with Dieter himself, Matthias Schweighöfer...

Before his Hollywood breakout role in Army of the Dead, Matthias Schweighöfer had already been a star in the German-speaking world as both an actor and director of romantic comedies. With nearly 80 credits as an actor in film and TV — along with 17 as a producer and six as a director — the 40-year-old is finally taking his vision worldwide with Army of Thieves.

The Army of Dead prequel, which he also directed and produced, sees Schweighöfer reprise his role as Dieter. Years earlier working as a small-town bank teller, Dieter gets drawn into the adventure of a lifetime when a mysterious woman recruits him to join a crew of Interpol’s most wanted criminals, attempting to heist a sequence of legendary, impossible-to-crack safes across Europe.
Ahead of the film’s debut on Netflix, they spoke with Schweighöfer about the inspiration for Army of Thieves, the greater Army universe and, yes, that infamous scream.


The Italian Job, the 1969 British comedy caper starring Michael Caine, was one of several films that set the tone for Army of Thieves. What were some others?

I think I saw every heist movie in the world from the '60s on, and there's a lot of heist movies, but I focused on the stories about safes. I never saw that in a film before. I focused on the Asian market too. I watched a lot of Asian horror stuff, movies like I Am a Hero and Train to Busan, and I watched Dawn of the Dead. And then I just focused on a lot of Steve Carell films, and especially Pixar movies, to sell the humor in the film so that it's not only German, it's universal.


Why do you think Dieter was such a fan favorite in Army of the Dead?

He's part of the comic-relief team with Omari Hardwick, and he’s a very funny and likable dude. What I love about Dieter is that he's just a normal guy but very shy, very weird. He has these crazy hobbies, he loves safes, and he believes in all this myth stuff. What I really love about this character is that he’s proof that everyone in the world needs love and wants to be loved by someone. And for me, this character is my way of saying, “Hey, I always was insecure here in my country, but I can go out there. I can be big. I'm allowed to dream big. I can be everything and I can do everything if I'm willed to and powerful.”


Your piercing scream is one of the great comedic highlights of both Army of the Dead and Army of Thieves. Do you squeal like that in real life?

To be honest, I have a crazy, high-pitched laugh, and my best friend has the same pitch. When we laugh together, people leave a restaurant because it's so loud. I love that part of acting when someone is doing a weird thing you do not expect. I was a huge fan of Chris Tucker in The Fifth Element because he screamed really loud. But in real life, I do not scream like that, but I love to use it for characters because it's always a very unexpected move.


How do you describe the chemistry between Dieter and Nathalie Emmanuel's Gwendoline in the film?

For Gwen, it's like, “Hey, I have to solve a problem. I have to find the best safe cracker in the world because I would love to go on a quest.” For Dieter, it's like, “Hey, there's this beautiful girl and this crazy job. Why not do it and maybe I have a chance to have a girlfriend at the end, because she's cool. And I think she likes me too.” But what I love about that is that even if they're not on the same page, and they have their fights, they have to trust each other. They both love the quest and they both love adventure, and I think that's where they connect.


How does Army of Thieves deepen our understanding of Zack Snyder’s Army universe?

First, it's not about just the money, it’s about human beings and it's about their stories. It's about having a passion and about survival — survival in love, survival in life. If you do not take chances, you won't ever live a real life. I think that's what we can learn from these two films: In every moment, be present.
Army of Thieves debuts Oct. 29th on Netflix.
Image & info - Netflix
Email ThisBlogThis!Share to TwitterShare to Facebook