Film - A Bird Flew In 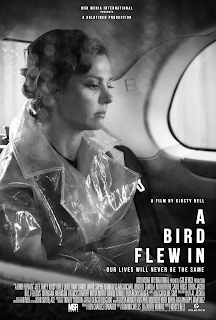 Goldfinch Entertainment has shared the poster and trailer for their latest film, A Bird Flew In, which gets its World Premiere at Raindance Film Festival next month...

The film has been Officially Selected for Raindance Film Festival and nominated for Best UK Feature and will have its World Premiere at the Festival on November 5th at Curzon Soho. It is also in competition at the Evolution Mallorca Film Festival and will also screen at the Ontario International Film Festival.

A Bird Flew In marks the directorial debut of Goldfinch CEO Kirsty Bell and stars Derek Jacobi, Jeff Fahey, Julie Dray, Sophie Kennedy Clark, Sadie Frost, Morgana Robinson, Camilla Rutherford, Michael Winder and Frances Barber.
Previously titled Alone, the film was conceived by Kirsty in the first week of lockdown. Shot in black and white in a cinema verité style, the film itself tells the story of when lockdown is imposed, and the cast and crew of a film are taken from the set and sent home – alone. Actors without an audience. Directors without a script. Couples fall apart while others come together. A feature film composed of six interlinked narratives, A Bird Flew In explores what happens when we are freed from external distractions and forced to find the meaning in our lives and loves.
Kirsty Bell said “Whilst the film was creatively conceived as a result of lockdown, it’s narrative and interwoven vignettes rather discovers what happens in isolation and emotions are enforced in a pressure cooker environment. I wasn't looking to explore the statistics or the pandemic but rather focus on the personal, the people and how their relationships were impacted. This film is borne out of a pandemic but focuses on hearts and minds and that’s why its force resonates with us all. Twelve protagonists are explored and spied on up close and personal - their lives put under a microscope for all to see. They all are neither extraordinary or ordinary - they are simply just people who we follow."

The film was written by Elizabeth Morris and multiple-award-winning magazine editor, journalist and film critic, Dominic Wells. Ben Charles Edwards produces, with Sergio Delgado as Director of Photography and Philippe Martinez as Executive Producer. The feature is edited by John Smith whose previous feature films include the Oscar-winning ‘Leaving Las Vegas’, 'Sliding Doors' , 'Proof of Life' , 'Race' and 'The Life and Death of Peter Sellers', for which he won an Emmy for Best Editing.
A Bird Flew In premieres at Raindance Film Festival on 5th November. Tickets are availablehere
Image & info - Goldfinch
Email ThisBlogThis!Share to TwitterShare to Facebook