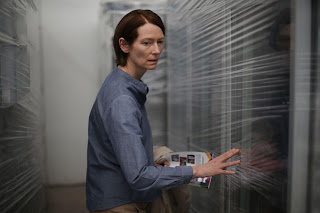 From acclaimed filmmaker Apichatpong Weerasethakul, and starring Tilda Swinton, Memoria is released in cinemas in the UK in January, thanks to Sovereign Film Distribution. Watch the trailer...

Winner of the Jury Prize at this year’s Cannes Film Festival, and nominated for the Palme d’Or, Oscar-winner Tilda Swinton (The French Dispatch, The Souvenir) stars in Apichatpong Weerasethakul’s meditative exploration of memory and the human condition.

Visiting her sister in Bogota, Jessica (Tilda Swinton) is awoken by a loud bang, audible only to her. Restless and disoriented, she roams the city in search of an explanation for the mysterious sound, becoming immersed in the aural richness around her – whispers in a hospital room, sound effects playing in an editing studio, indiscreet noises from a city square. Despite being present throughout, Jessica’s motives remain opaque and her encounters enigmatic. Soon she begins to confront the unsettling sights and sounds that call her identity into question.

Weerasethakul’s Uncle Boonmee Who Can Recall His Past Lives won the 2010 Cannes Film Festival Palme d'Or prize at the 2010 Cannes Film Festival, and Tropical Malady won a jury prize at Cannes in 2004; MEMORIA is his long-awaited first English language feature shot outside his native Thailand, and his most accessible film to date - which had its UK premiere at the BFI London Film Festival on October 16th, at a sold-out special screening. Here is their trailer.
Memoria is released in UK cinemas on 14th January.
Image - Sovereign Film Distribution
Email ThisBlogThis!Share to TwitterShare to Facebook