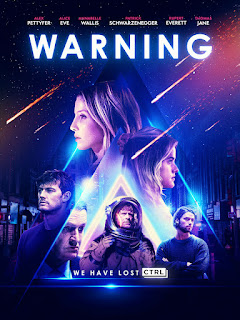 Following the film's UK Premiere at Sci-Fi-London film festival earlier this week, and with its upcoming release on Digital thanks to Signature Entertainment, Ren Zelen takes heed of Warning ...

Warning is a loosely connected anthology of stories set in the near future and is the debut feature of director Agata Alexander, from a screenplay co-written with Jason Kaye and Rob Michaelson.

The film presents various futuristic vignettes which explore the relationship between people and technology and the dark avenues down which this relationship might lead. The film attempts to tackle the repercussions of loneliness, privilege, inequality, and folly in a society which has access to technology which allows them to indulge their particular vices or individual needs, often at the expense of others.

The opening sequence concerns a maintenance astronaut named David (Thomas Jane), who is doing a routine repair on a satellite when a power surge blasts him away into space and sets him adrift with only an AI link for company.

He talks to his AI, recording monologues. He questions God, ponders upon the human condition, contemplates his own mistakes and regrets, all the while observing planet Earth from a distance, where electrical storms presage some kind of environmental disaster. We return to David between the other sequences, as he muses on life while he floats in space, using up his last days of oxygen.

Meanwhile, back on Earth, in a facility for out-of-date robots, a kindly attendant named Brian, (Tomasz Kot from Cold War) tries in vain to interest potential customers in an eccentric elderly android named Charlie (Rupert Everett) who tells dodgy jokes and isn’t really useful for anything much except leisurely companionship. 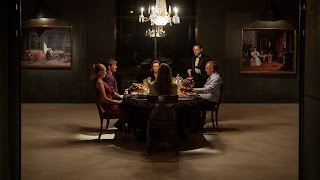 Elsewhere, Alice Eve offers an amusing turn as Claire, a somewhat vacuous young woman who has become reliant on her Alexa/Siri-like AI assistant to help make her a ‘better person’. Interestingly, the ever-vigilant device is called ‘God’ and it notes her ‘sins’ and ‘rewards’ her good works.

When the ‘God’ device breaks down Claire is panicked and disoriented. Lost without the guidance of her technological deity this satirical segment follows Claire’s efforts to manage without her God-guide and to ultimately get it ‘fixed’.

In another segment a jilted lover called Ben (Patrick Schwarzenegger) endlessly relives scenes from his past relationship while Anna, his ex-girlfriend (Kylie Bunbury), keeps glimpsing a shadowy figure in a VR-like headset appearing and disappearing in her vicinity.

In the longest segment, a young woman (Garance Marillier, from Raw) agrees to rent out her body to a middle-aged man she’s been matched with in a special online service, but not in the way we might expect. The transaction enables him to experience a night of reckless partying in a luxurious hotel - a situation which gradually turns sour. 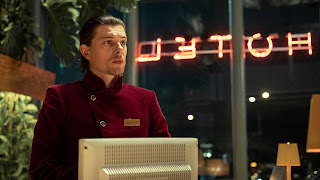 Given its episodic construction of cautionary futuristic tales, it is almost inevitable that Warning is going to be compared to Charlie Brooker’s TV series Black Mirror. Certainly, there are similarities, and Alexander’s film may suffer due to Black Mirror’s critical success.

Choosing to film an anthology of stories for a debut feature is a risky option, it’s a difficult task to get right. As in Black Mirror, some segments will be stronger or more enjoyable than others, and in the case of a film, the attempt to somehow link all the segments together will prove to be an additional challenge.

Despite the inevitable comparisons with Black Mirror, and looking at Warning on its own merits, the film still manages to make its stories engaging and thought provoking, even if the format is now considered to be not entirely original.

One of the strengths of Warning is a terrific cast who raise the calibre of each tale. Their challenge is to interest us in their unique characters and the situations they find themselves in, given the short time they are on screen, and they mostly succeed in doing so. The set design and effects are also well executed and look very slick for a low-budget film.

Where the film may not be entirely successful is in the lack of thematic connection between the various stories, other than the fact that they share the same world. There are a few recurring characters and news stories in the background indicate the ongoing climatic disturbances. We have intriguing glimmers of its interconnectivity whilst the stories are played out, but the links remain tenuous and vague, and the threads are never quite pulled together.

There’s certainly a message about human emotion and need, the relationship of people to each other and to technology, and some important issues are highlighted, but their significance becomes vague and inconclusive - perhaps that is the point.

The denouement ends matters so abruptly it feels rather as if all these musings on life, death and the universe don’t really matter. Perhaps the idea is that we must live authentic lives each moment, as like this group of disparate characters, ultimately we all go hurtling towards oblivion.