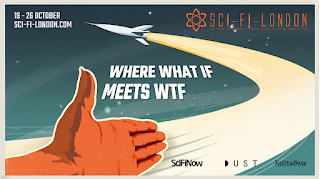 The Sci-fi London Film Festival 2021 has launched its cosmic 21st annual programme, which will run from the 19th until 26th October and promises "seven days of fabulous films"....
Press Release
This year's festival will showcase a fantastic lineup with 2 world film premieres, 8 UK film premieres, 11 world short premieres and 13 UK short premieres. It will host 13 features and 50 shorts alongside its regular classic cult events such as the 48 HOUR FILM CHALLENGE and SCI-FI-QUIZ. 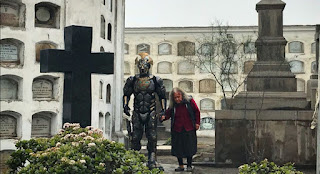 Opening this year's festival on the 19th October is Agata Alexander's Warning. This film is dark, witty and spectacular. It has a stellar cast, including Annabelle Wallis, Thomas Jane, Alex Pettyfer, Patrick Schwarzenegger, Alice Eve, and the marvellous Rupert Everett. Warning is a visually arresting, thought-provoking sci-fi exploring the meaning of life through multiple interconnected lives. This is like Black Mirror just jumped out of a plane without a parachute! Doomsday is coming. But from where? Global warming, the isolation and breakdown of society, because the immortals hate us mortals. Maybe from the asteroids charging toward the planet?

The festival's Closing Night on the 26 October at Stratford Picturehouse is the World Premiere of Moon Heart. M, played by Peru's most illustrious actor, Haydeé Cáceres, is alone, almost invisible to society, not an outcast, just old, poor, homeless and ignored. Her only friend is a lone ant. M's world is full of nostalgic memories and a dark presence that haunts her. Then one day, a 'mechanical angel' arrives to help change her life. At its core, this is a film about marginalisation and the abandonment and mental anguish that homeless people suffer. However, it is also an extraordinarily warm film with an outstanding lead performance.
Other major Film Premiere Galas this year include the World Premiere of Repeat, by UK director Richard Millar. Professor Ryan Moore (Tom England) believes that his new device communicates with those who have 'passed'. He is obsessed with the project because his daughter, Samantha, has been missing without a trace for months, and he fears the worst. But, in one experiment, it appears he has made contact with Samantha. His grief is awful, but he thinks he has found a way to 'bring her back'. But will the truth of what happened be even more devastating. The cast includes Charlotte Ritchie, llila-Jean Wood and Nina Wadia, who is well known from EastEnders, goodness Gracious Me and is currently battling it out on Strictly Come-Dancing. 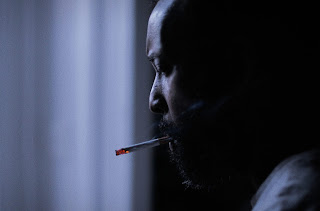 EXPOSURE 36. (Dir. Mackenzie G. Maur, Country: USA, Year: 2021
Runtime: 90 mins Language: English.) DIRECTOR IN ATTENDANCE
Set in New York, three days before the world will end, we meet Cam, a struggling and grieving photographer. Coping with addiction, Cam's only plan is to succumb to his substance abuse as the world collapses around him. His one ambition is to capture final days on a roll of 35mm film. But his plan is disrupted when his friend goes missing, putting him on a journey to find out what happened and who's responsible. The film was partly shot during the Covid-lockdown in the USA. This adds a sublime realism to the film's portrayal of loneliness, guilt, and isolation. Cast: Charles Ouda, Jennifer Leigh Whitehead, Nick Smithson


TIONG BAHRU SOCIAL CLUB (Dir: Tan Bee Thiam Country: Singapore, Year: 2021, Runtime: 89 mins, Language: Chinese, English, Malay, Tamil (English subtitles).
Ah Bee's life is a dull, monotonous one and he seems stuck in a rut. Then, one day, the opportunity arises to work at the new Tiong Bahru Social Club, a data-driven project to create the happiest neighbourhood in the world. His encounters with the neighbourhood's residents and the authority that runs the place reveal the absurdity of life. This candy-coloured satire flirts with Art Deco nostalgia set in Singapore's most 'gentrified' district. With a sprinkle of THE TRUMAN SHOW and a dash of BLACK MIRROR, though much less pretentious, this is an incisive subtle film, with humour as offbeat as it is caustic. Never has a futuristic dystopia been so heartwarming. Cast: Thomas Pang, Goh Guat Kian, Jo Tan


STRAWBERRY MANSION (Dir: Kentucker Audley and Albert Birney, Country: USA, Year: 2021, Runtime: 91 mins, Language: English.)
Maybe tomorrow, an all-seeing surveillance state will start to invade our innermost thoughts and dreams. And, of course, we'll be subject to 'dream audits' to collect taxes on our unconscious lives. So, one day, mild-mannered government agent James Preble travels to a remote farmhouse to audit the dreams of Bella Isadora, an eccentric artist. But Bella's vast dream archive hides a secret that offers him a chance at love — and maybe a way out of his dull life. This gorgeous production draws on almost every filmmaking style and technique — as if someone had given Gaspar Noé happy pills. Cast: Kentucker Audley, Albert Birney, Penny Fuller

NIGHT RAIDERS (Dir: Danis Goulet, Country: Canada/New Zealand, Year: 2021, Runtime: 97 mins, Language: English/Cree.)
The year is 2043, and North America has been shattered by war. The totalitarian regime that remains now forces children into brutal military training to fight in the futile war. To save her daughter, Waseese, from this fate, Niska has been hiding them in the woods, living a reclusive life dominated by fear of discovery. When the pair are forced into the remnants of the city, Waseese is captured along with several others. Niska finds herself among the 'Night Raiders', a group of indigenous rebels who plan to free their children. 'Goulet's debut feature is a captivating film that astutely uses the sci-fi genre to criticise the treatment of First Nations people.' Cast: Elle-Máijá Tailfeathers, Brooklyn Letexier-Hart, Alex Tarrant 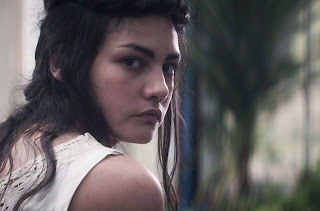 GLASS HOUSE (Dir: Kelsey Egan, Country: South Africa, Year: 2021, Runtime: 94 mins, Language: English.)
The world we know has gone and the 'shred' altered our minds. And yet in this desolate, destroyed world, one family exists, out of sight. The daughters work the land, their mother rules with an iron hand. Then, one day the sisters are seduced by a stranger who shatters their peace and stirs up a past best left undisturbed. Glasshouse has a haunting score, beautiful photography and superbly detailed production design. This debut feature by Egan is one of the most tightly written and piercingly observed science fiction films we have seen for years. Cast: Jessica Alexander, Hilton Pelser, Brent Vermeulen, Adrienne Pearce, Kitty Harris, Anja Taljaard


12 MONTHS OF KAI. (Dir: Mutsumi Kameyama, Country: Japan, Year: 2020, Runtime: 83 mins, Language: Japanese (English subtitles). DIRECTOR IN ATTENDANCE
Something has changed in a world where 'personal carebots' are commonplace and cater to our every need. Kyoka, who lives in Tokyo and has a successful career, decides to get a personal care humanoid (PCH) Kai. He is perfect. He learns quickly and knows Kyoka so well. However, Kai seems to have real emotions, and Kyoka is lost in this new relationship. Her friends are worried for her, but soon they will all have to confront an unexpected change in the world. Cast: Ayaka Nakagouchi, Kosei Kudo


VISITOR (Dir: Alberto Evangelio, Country: Spain, Year: 2021, Runtime: 91mins, Language: Spanish/Catalan(English subtitles) DIRECTOR IN ATTENDANCE
Marga lost her sister in a tragic accident when they were children. Years later, she has relationship problems and decides to get some space and visit the old family home. But strange things start happening, and she discovers a portal to another reality, one where her sister is alive and grown-up. In that parallel dimension, her sister and her other self warn Marga that something terrible is about to happen, but who can she trust? Cast: Jan Cornet, Iria del Rio, Miquel Fernández

ESLUNA: THE CROWN OF BABYLON (Dir: Denver Jackson, Country: Canada, Year: 2021, Runtime: 102 mins, Language: English)
Esluna is ruled by descendants of a sacred bloodline, where technology is powered by the highly advanced relics of the ancients. Raised by the monks who protect the relics of the old world, MAEVE is a treasure hunter who uses her skills to find other artefacts for the leaders. When her mentor, Caz, is kidnapped by a militia group run by a rogue monk, Maeve learns of a powerful relic known as 'THE CROWN OF BABYLON', rumoured to have the power to bring back the dead. She teams up with Bataar, a young man who mysteriously came to Esluna from another world years ago and worked with Caz to find the crown at the time of her abduction. Now, they must find the crown, save Caz, and stop the rogue from endangering the lives of everyone they know. A thrilling animated action-adventure set in the retro-futuristic world of Esluna, and great fun for all the family! Cast: Grace Chan, Shawn O'Hara, Ariel Hack, Alain Williams. 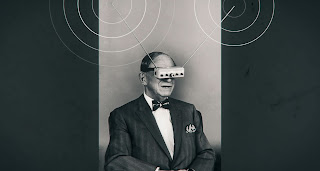 TUNE INTO THE FUTURE (Dir: Eric Schockmel, Country: Luxembourg, Year: 2020, Runtime: 72 mins, Language: English.)
One hundred years before the internet, a self-declared tech guru started preaching the future to his flock of outsiders. Meet the most influential nerd you may never have heard of: Hugo Gernsback. Decades ahead of the curve, he foresaw Skype, jetpacks, space mining and drones. But even though he would accumulate over 80 patents throughout his life and befriend the likes of Edison and Tesla, his most influential invention remains Science Fiction!
Which screens with the short film MY BRAIN IS BIGGER: THE RISE AND FALL OF ELEKTRO, THE SMOKING ROBOT Dir. Ian Johnston, Canada, 10mins, English, UK PREMIERE
A whimsical look at the life of America's first celebrity robot, Elektro. He was the 'next big thing', from the World's Fair to Soft-porn star... and then he disappeared.

THE HIGH FRONTIER: THE UNTOLD STORY OF GERARD K. O'NEILL
(Dir: Ryan Stuit, Country: USA, Year: 2020, Runtime: 91 mins, Language: English.)
Gerard K. O'Neill was a physicist and space colony pioneer. In 1977, he wrote The High Frontier: Human Colonies in Space, A book that sparked an enormous grassroots movement to 'open the high frontier' to make space available and beneficial for all mankind. The film is told through "Gerry's Kids", as they affectionately call themselves; his peers, family, and the younger generation who followed that movement and are now in charge of the modern-day space industry.

Which screens with the short film ARTIST DEPICTION BY STEVE R. DODD
Dir. Brett Ryan Bonowicz, USA, 19mins, English, World Premiere
Steve Dodd has painted space scenes since the 1970s. Working at home with no phone, internet or computer, he has created hundreds of beautiful 'spacescapes': visions of a positive future amongst the stars. This is his first recorded interview.