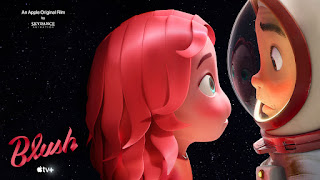 Writer/director Joe Mateo has produced, in association with Skydance Animation, a beautiful ten minute long animated film that deals with some serious emotional issues in a very tender and beautiful way.

A horticultural astronaut is busy aboard his ship tending a plant when a proximity alarm sounds but it's too late and his ship hits a meteor and crash lands on a barren small planet. The plant he tries to save, by transferring it to the planet's earth, starts to die. With no help on the horizon, the astronaut starts to give up when a flying saucer finds itself in the same situation, crash landing on the same planet. The alien within has a life force that brings all the astronaut’s plants back to life, allows him to breathe without a helmet, and fixes the barren planet's ecosystem. They spend time together, eating the fruits that now grow from the plants and fall in love, combining both their wrecked ships to build a home, and have children who learn and play and grow on the planet. One day the mother falls ill and passes in the arms of her beloved astronaut. Her life force drifts into space, suffocating the astronaut until he is saved by his children, and they start to grieve together.

Blush is a beautiful story that deals with love and loss in an elegant and gentle way that should help younger family members who watch. It could be considered perhaps a little saccharine for some tastes, but I love my animation to be served with heaps of sugar sweet metaphors, so I was blown away by both the story and the animation itself, which is beautiful, and bright when it needs to be and dark when appropriate.

Blush is a fantastic way to spend ten minutes, and a wonderful way should you wish to introduce your youngsters to some maybe more mature themes without frightening them. Great animation, delicate story, and make sure you stay through the credits.
Find Blush at London Film Festival, available online until 17th October on BFIPlayer
Image - LFF
Email ThisBlogThis!Share to TwitterShare to Facebook