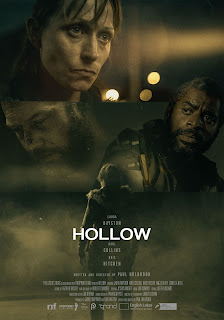 I’m not sure whether it's just me or maybe there is a filmmaking rule, but the very best projects I tend to find happen to be about the darkest of subject matters. Hollow from writer/director Paul Holbrook fits this category as it is a great short film that just happens to cover just about every heavy and depressing emotion a human being can suffer and, my word, it does it well.

Laura Ryan’s (Laura Bayston – Killing Eve) daughter has been killed by the evil Niall Lavin (Kris Hitchen – Sorry We Missed You) and the film starts with a depressed and suicidal Laura hearing the news that Niall has been given parole and has moved back to the area. Personal anguish starts to give way to utter rage and thoughts of vengeance as Laura’s heart empties of any love or hope. A trip to church to speak with Father Hill (Karl Collins – Attack the Block) leads to a conflict about God but also kindles an unlikely bond between a mother who has nothing left and a broken man trying to do good whilst battling his own demons.

Whilst Hitchen plays a great scumbag type, this film belongs to Bayston and Collins whose performances are staggering. Both give career best showings that drip with darkness and raw emotion and both play their own personal battles with conflict, violence, revenge, despair, and loss with a complete disregard for the audience's wellbeing. This left me incredibly impressed on one hand and shattered emotionally on the other, and the fact these two actors could portray all of this in a complex story that is only about 25 minutes long is a testament to how good they both are. They are spellbinding turns that are interesting and sad, compelling and frightening, and the stories round off in one of the most messed up and surprising endings I can remember seeing on screen for quite a while.

Take the performances and add in the look of the film with its incredible colour pallet and cinematic masterpiece scenes, its sharp editing, and interesting storytelling tools like narration in some parts and silence in others, and an unnerving score that perfectly encapsulates the madness, and you have one of the best short films for many a year that I would queue up to see play out in a longer form just to see that visual beauty and those truly remarkable actors do their job.

Hollow is a dark and emotional subject matter that is not shied away from in either look or performance and the film is all the better for it. Truly a stunning slice of emotional cinema.
Image - Courtesy of Paul Holbrook
Email ThisBlogThis!Share to TwitterShare to Facebook