Short Film - We're Too Good For This 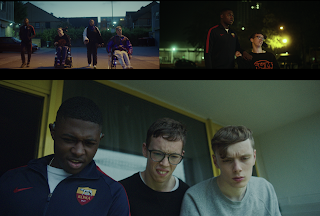 Steve Taylor-Bryant is watching some of the short films that are available for free at London Film Festival, thanks to BFIPlayer. Here are his thoughts on We're Too Good For This...

Writer/director Missy Malek proves you can do quite a hard hitting job of storytelling in just twelve minutes with We’re Too Good For This. Set on a council estate, three disabled friends spot another friend, a hearing impaired friend, do a drug deal because she can’t get a job, which leads them to believe that their disabilities shouldn’t hold them back from earning some serious money. Part of the estate is closed by police whilst a murder investigation takes place and the drug dealing brother of one of the disabled friends cannot get to his bosses’ stash of cocaine. The friends use their disabilities to their advantage by fooling the unsuspecting police into letting them into the closed building where they take the stash and deal it for themselves before the consequences of their actions catch up with them.

The tension and drama created by this fantastic cast alongside some fast writing and editing leaves the audience almost breathless at the end of the film; I am not sure I can hold my breath for twelve minutes, but it certainly feels like I did. We’re Too Good For This is definitely a compelling premise that highlights, in an incredibly unique way, that you shouldn’t judge people’s capabilities by their disability as this crew of misfits certainly turned my expectations on their head. I am not the one to judge whether drug dealing is a suitable delivery system for the message that people with disabilities can do anything they put their minds too, but I took notice in a big way.

We’re Too Good For This is a sharp and creative short film that chooses to hammer home a point with zero subtlety, and I cannot describe how refreshing I found that.
You can watch We're Too Good For This for free online for the duration of London Film Festival HERE.
Image - LFF
Email ThisBlogThis!Share to TwitterShare to Facebook