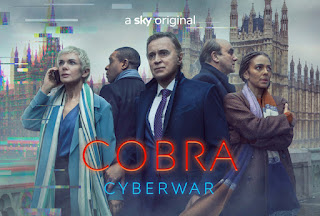 With all six episodes of series 2 of COBRA, called COBRA: Cyberwar, now available to binge-watch after its premiere on Sky yesterday, read a short Q&A with the series writer and creator Ben Richards...

Press Release
In times of national emergency, a team of Britain’s leading experts, crisis contingency planners and most senior politicians assemble under the name COBRA to coordinate the response. The nail-biting decisions this committee makes drive the compelling action of the series as we witness their actions play out at ground level, in the worst hit parts of an already fractious country.
But it is not just the nation we see rocked by the calamitous events of COBRA. From the corridors of Whitehall to the salons of No.10, we also explore the lives of the politicians and advisors that make up the committee. By following these interior lives we provide a unique look at the inner workings of a modern government made up by people under immense pressure of not only working to save the country, but also their complex personal lives.
In COBRA: Cyberwar we find a Britain in trouble. Following years of political instability and a fractured relationship with the world’s superpowers, this is a nation and a government on the back foot, and one we now see struck by a major disaster without simple solutions.
As the government scramble to combat a new, invisible threat they are forced to question everything they thought they knew about our relationship with the rest of the world. New allegiances are formed, new enemies discovered, and every piece of willpower, nerve and courage will be required to face this new and overwhelming foe. Exploring themes of authenticity versus deception, control versus liberty and the value of the truth when all else has been lost, COBRA: Cyberwar is a thrilling series which asks what you would be willing to sacrifice for the survival of your country.

Here's the interview with BEN RICHARDS (WRITER AND SERIES CREATOR)
Series one saw the COBRA team tackle the fallout from a solar flare. What emergency does the COBRA: Cyberwar team face in series two?
One of the big challenges is finding a big disaster, but not one that gets cleaned up and goes away – it has to have consequences and has to get worse, allowing us to explore the political and social themes as well. The central premise of the whole series is how you hold a society together when it comes under assault. In Series one it was the sun. For series two, writing it pre-Covid, a bad flu pandemic was mooted but I dismissed it and I’m glad I did now! Instead, we decided on a cyberwar with a number of fronts including fake news and the spreading of panic through conspiracy theories. And we needed a trigger, a big bang, that pushes us into a different type of story, which became the munitions ship exploding off Kent.
People initially questioned how realistic a solar storm might be – how rigorous has the research been for Series two?
As a dramatist, you’re not bothered about whether something is the most likely scenario, but whether it could logically happen. We presented a probable worst-case scenario for Series one and it was backed by a lot of scientists. This time I wanted to do something more geopolitical, and it increasingly became about cyberwarfare, which there have been more and more stories about over the past 18 months. The problem with cyberwar was how to make it dramatic, then we looked at the impact of a critical infrastructure hit, which would be catastrophic. I wanted to examine was what happens when a society loses the shared values and beliefs that should glue it together and, over the period I wrote it, these themes have become part of everyday life.
How has the pandemic affected your writing of the show?
I submitted the first draft of this show on February 20th, 2020, just as the pandemic was starting to spread, then wrote the rest through the first wave, when filming was put back. As with Brexit and series one, I wanted to nod to the existence of the pandemic without really saying where we are in relation to it, so there’s one scene in episode two about someone’s father dying on their own in a hospital bed. We’re not pretending it didn’t happen, but it’s not what the drama is about. The way viruses work, everything feels a bit like a metaphor, especially the terminology of when we’re talking about a cyberwar, but it’s genuinely not intended to be.
How did you want to push and develop the characters this year?
If there was a lesson learnt from series one, it was that personal stories with an ensemble cast that don’t feed directly into the main action become slightly dissatisfying. You can’t really do them justice, so we’re more focused on the professional challenges and issues this year, only having personal elements where they directly impact the characters or the story. I wanted to look at Robert Sutherland’s relationship with his family from a different perspective, so I thought about Cherie Blair and her misogynistic treatment by a lot of the press. So I wanted to write about how Rachel, Robert’s wife, becomes a target in the information war, being depicted as “the wicked witch”. 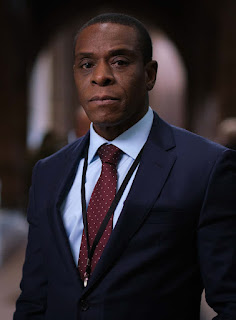 What does the new Home secretary, Joseph Obasi, add to the mix?
We needed a new Home Secretary, because Archie had resigned in a huff. I thought it would be interesting to show a Conservative establishment that isn’t solely staffed by white men. Obasi is also a political player who becomes part of a three-way battle for power in government towards the end of the series.
The opposition come more into the picture this time as well, in the form of Labour.
This one was a nightmare! At the time I wrote it, we were coming to the end of Jeremy Corbyn’s leadership and no one was sure what would happen next. I wanted a bigger role for the Labour Party, not least because we needed to bring Francine Bridge back into the story, and Labour seemed the best way to do that through a by-election she fights where she’s up against a hard-right “traditional values” opponent. But I couldn’t anticipate how quickly Keir Starmer might look vulnerable or how quickly Labour might start to self-destruct, and Andrew Buchan, while being nothing like Starmer in the way Sutherland is nothing like Boris Johnson, perhaps resembles who the next Labour leader might be… It’s been a massive challenge and got more stressful as the real-world political situation developed, but I think by concentrating on the by-election, we’ve got around it.
How would Sutherland have faced the Covid crisis?
Sutherland does make short-term, calculated political decisions, but he has a moral core. While he would have had public protection at the heart of everything he did, he would have had the capacity to be pragmatic as well. He’s a two-tier utilitarian and the pandemic is a classic test of that: how do you measure the utility? How do you measure the costs and benefits?
What was the biggest challenge of working on Series two?
Covid, without a doubt. Our producer Joe Donaldson did incredible things to steer us through while we shot over the winter, in the north-west in the middle of the second wave. It was hard creatively as well: I couldn’t write at the beginning because I was so distressed, we had no idea if we would be cancelled, and psychologically it took me a couple of months to start writing again. It felt weird to be writing this stuff as the news got worse and worse.
And the greatest pleasure?
As much I get angry about politics, it can be quite funny. I love being able to write different voices. I love writing about Tory governments and I love watching Tory politics. Ships can explode and suns can bombard the earth, but what I’m really interested in is the degree to which you can maintain a coherent society. Writing about maintaining core values under tremendous stress is always the big pleasure.

All six episodes of the second series of COBRA: CYBERWAR will be available on 15th October on Sky Max and streaming service NOW.
Images - Sky
Email ThisBlogThis!Share to TwitterShare to Facebook