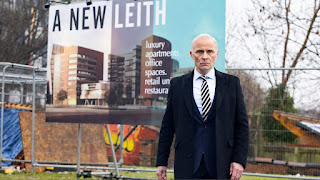 Ahead of the second four-part series of Guilt starting tonight on BBC Scotland (catch up on Thursday on BBC Two) read an interview with Neil Forsyth, Guilt writer and Executive Director...
In an Edinburgh cellar, two gunshots ring out. Across town, Max McCall is released from prison. These two events gradually come together as Max tries to rebuild his life, and new arrival Erin tries to save hers.

When Roy Lynch rebuffs Max’s efforts at a reconciliation, Max turns to Kenny for help - despite their troubled history. However, this is a newly confident Kenny, with a budding new relationship, and he provides Max with a tougher challenge than expected.

To help his daughter, Roy finally turns to Max and Kenny and forces them to help him. It appears that Max’s fall from grace is complete - but he has a secret motivation to reveal.

Max is released from prison, Jake is in America, Kenny has built a life of sorts for himself, and Roy is two years older and looking to build domestic bridges and seek a new chapter in his life.

Max’s character, when he’s introduced in series two, seems a shadow of his former self from series one. Was it fun to create that new character and slowly bring the old Max back?

Yes, I enjoyed seeing a damaged, weakened Max, and then steadily placing him back on the front foot. What was interesting to me was taking a man not given to self-reflection and forcing him into two years of self-reflection. I wouldn’t say he comes out a changed man, but he is altered. And for someone as focussed and certain as Max, that’s an important change.

Equally, did you find it amusing to reverse Max and Kenny’s roles and see how that changed the dynamics of their relationship?

Very much so, though that is a relationship set so firmly in stone that the reversal was never going to last long, and I think even Kenny knows that.

The series kicks off with two characters being shot. Did you intend to create a shock effect for the audience with that scene?

First and foremost, I wanted to create a shock effect for myself. The more challenged and excited I am kicking off a show, the more I enjoy writing it and the harder I work with the script editor Neil Webster to make it all tie together. I try to write stories I would like to watch, and I think it’s indulgent to ease into a story. Better to start boldly and try and keep the thing on the rails from there.

This series feels quite different to the first. The first series followed the thread of one storyline throughout but in the second series, there are so many more characters and storyline strands. Was that a conscious decision?

Again, I think I wanted to challenge myself, and I also wanted to deepen our understanding of a larger group of characters. Looking back at the first series, I think that having the one storyline then narrative branches off it made some of the surrounding cast slightly thinly drawn and often their involvement was purely to service that main plot. Having multiple storylines that then entwine I found more liberating, in hopefully creating a decent group of rich characters. 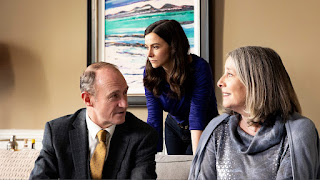 The second series feels much darker than the first. Did you intend to give it a more dramatic, sinister, less comedic feel and why?

I greatly enjoy people telling me that this series is darker. The first series started with Max and Jake running over and killing an elderly man and then illegally moving his corpse! I honestly couldn’t say if it’s darker or not, it wasn’t a conscious decision, it’s just how the story and the characters came out.

Was it a conscious decision to give the series such a Scottish feel?

Yes, it was. I lived in Leith for a long time, I have a great love of Edinburgh and of course Scotland and I felt there were things I could do in the script - particularly being more specific on geography - that would help ramp up the Scottishness and, this surely can’t be a word, the Leithness of it all.


You’ve introduced new characters this time round. Do you see their stories continuing or are you satisfied that you have given them all closure?

As from the first series, if we do more then it would be about working out who still has story to tell, and who I feel we have yet to fully examine as a character.


Do you have more adventures with Max planned?

I would love to write a third and final series and make Guilt a trilogy. I think I could keep that thematic approach in that the first series was about guilt, the second series is about revenge and the third series could be about redemption. That feels like a nice shape to the show to me, so we’ll see!

Due to covid restrictions, you weren’t able to be on set during filming like you were during series one. Was it hard to not be there to ensure your vision was properly portrayed and were you happy with the outcome?

It was really hard. Neil Webster (Script Editor and Executive Producer), Nerys Evans (Executive Producer) and I were unable to visit the set. I think Neil went for one day because he lives in Scotland, but otherwise it was just getting the rushes at the end of each day and speaking to Pat Harkins (Director) and Eric Coulter (Producer) on the phone.

The fact that I believe we’ve come out of it with a really well put together second series is a huge testament to Pat, Eric and their crew, and the cast who all produced such fantastic work in what must have been very difficult circumstances. Personally, I found getting the rushes at the end of each day almost more helpful than spending a day on set trying to track what was being shot. And it was definitely warmer.

Images - BBC
Catch up with series one on iPlayer
Email ThisBlogThis!Share to TwitterShare to Facebook