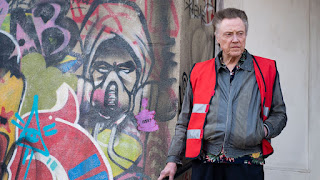 Christopher Walken was filming in Bristol? Apparently so. Ahead of the first episode of  a new drama series written and created by Stephen Merchant, read an interview with Christopher Walken about The Outlaws ...

Press Release
The Outlaws is a contemporary British drama about a disparate group of lawbreakers thrown together to complete a community service sentence. Seven strangers from different walks of life - people who would never normally interact - are forced to work together to renovate a derelict community centre. They resent the menial physical labour and they resent each other. But when one of their number gets dragged into a dangerous world of organised crime, they unite in ways none of them thought possible.

Seven people from vastly different walks of life commence their Community Payback sentences, cleaning up and renovating a derelict building in Bristol. These ‘Outlaws’ include Oxford-bound Rani, (18, A+ student and kleptomaniac) and Christian (early 20s and in debt to the wrong people) who is doing everything he can to keep his kid sister Esme free of their clutches. As the group is shown the ropes by their new supervisor, Diane, we also meet John, a middle aged and middle-class white business man forced to share oxygen with criminals while he scrambles to save his family business. We also meet black Bristol civil rights veteran Myrna, (60), whose pursuit of direct action has put her at odds with a newer generation of activists.

Rounding out the group, struggling lawyer and divorcee Greg has found himself on the wrong side of the justice system. And Insta-celebutante Lady Gabriella Penrose-Howe (in her 20s) must learn to survive her sentence without a retinue of hangers-on. Meanwhile Frank, (70), a twinkly-eyed small-time crook, moves back in with the daughter he abandoned decades prior. Can any of them really reform? With disparate people forced into close proximity, tensions rise, prejudices are tested and lives begin to intertwine, for better and for worse.
Set in modern-day Bristol, the series celebrates the city’s distinctive culture and people. Along the way, there’ll be legal chicanery, budding romance, audacious acts of heroism and unexpected cases of mistaken identity. As the net closes around them, the outlaws will come to realise that they have more in common than that which sets them apart.

I play Frank. He's an American who's lived in England for 40 years or so. He married an English woman and has children and a life in England, but I'd say he's barely assimilated. He's a kind of a ne'er-do-well, I guess, a good man who’s good hearted and good natured but he's made a lot of mistakes. Probably has poor judgement. Often in trouble with the law, you know? Anyway, he means well and in this story he's part of this group of outlaws, people doing what we in America call ‘work release’. I think it’s a very good idea: instead of locking everybody up for nonviolent offences, you do something that could rehabilitate them and put them to some sort of good service, instead of sitting around all day behind bars.


How did you come to be cast?

I'm an actor, it was a good job and I'm a fan of Stephen Merchant. We met at my house and I was very taken with him. It's very good writing: you can tell that, if you've been doing it for as long as I have. I stand in my kitchen, I read the lines out loud and these were very good words. And, you know, it was great to come to England. I've been in England many times in my career, not to Bristol, but I've always enjoyed myself here. So it was just a good job.


Aside from the script what other factors affect whether or not you’re going to take a job?

The people you're going to be working with is very important. All the actors on this show are terrific, really terrific. It's a lot of fun to go to work and that's very important. There were other factors, of course, like being away from home and so on. But we filmed the first season and then there was a break. When you're in a job you always think, when the job is over, I'm going to take a break. But it doesn't take long to get restless again and you want to go back.

How did you find spending time in Bristol?

It's a terrific place. It's a university town. I live in Connecticut in America, which is rather close to Yale University, but there's a theatre there that I've worked at many times when I was young. Bristol is very much like that. It's a campus with lots of students walking around, but the Old Vic is here. I like it here very much. There’s a strong counterculture here. First time I was here there were riots, a lot of noise outside. Second time there was also a lot of noise outside, but I think it was on account of the soccer. 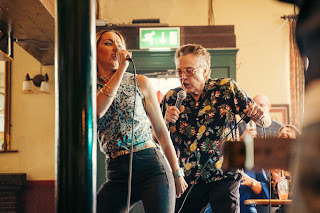 How have you found working with Stephen Merchant on set?

One: I like him, so it’s easy. But two: he's very good at making adjustments. Fixing, tweaking and getting everyone comfortable. Sometimes writers are very strict, you know, they insist on it being exactly what it is. And he's very flexible, which I'm all in favour of.

The other day I was in the makeup trailer with a lot of my cast mates who are younger than I. And I don't have any sort of technology. I don't even have a cell phone. I mentioned an English actor named Clifton Webb who was this marvellous actor, one of my favourite actors. And he made a lot of movies, you know, in the 40s in Hollywood. And I mentioned Clifton Webb and none of my younger colleagues knew who he was, I said: "He's one of the best actors, how could you not know?" And this one guy took his cell phone and punched in ‘Clifton Webb’. And in 30 seconds he had all these details - where he was born, his credits, where he started, where he lived in Hollywood, everything! It was amazing. I thought, I’ve got to get me one of those cell phones.


You’ve done lots of great comedy in your career, including several memorable stints hosting Saturday Night Live. How would you describe your sense of humour?

I think my sense of humour has very much to do with where I come from. I was in show business when I was five years old. And when I was growing up in America, it was the birth of television after the Second World War when television first started, and there were these huge shows like Milton Berle and Sid Caesar. And so I think my comedy is very much of that time.

I also loved Broadway musical comedy. I was in Broadway musicals for years as a dancer and I think my own sensibility (as well as my acting technique) is very absent of a fourth wall. The famous fourth wall doesn't really exist for me because of all that time in musicals where the other character in the scene is always the audience. So I'm always very aware of the audience. And I think that's where I come from.

Given the choice would you watch TV, go to the movies or the theatre?

Even now when somebody says, ‘Would you like to go to the theatre?’ I say, ‘Yeah, let's find a musical.’ I love musicals. And as far as TV goes of course I watch a lot of news and sports. I have a cable channel that has old movies 24 hours a day. So I watch a lot of old movies. The good thing is there are still some very funny people out there. Like Stephen Merchant - you should watch out for him.
The Outlaws, a 16 part series, starts on BBC One on Monday on 25 October at 9pm
Images - BBC
Email ThisBlogThis!Share to TwitterShare to Facebook