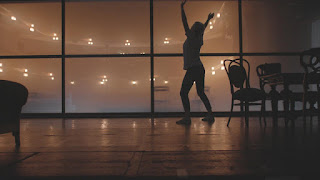 It is made up of actors acting and talking heads. Mainly directors from Russian theatre, but two English directors pop up regularly – Declan Donnellan, of Cheek by Jowl and Katie Mitchell. There are scenes from plays at the Moscow Arts Theatre and elsewhere: The Cherry Orchard. It is the sort of film that no English director would make without fear of ridicule because it is people talking about art in a serious manner.

I have said in reviews elsewhere that the British have a much more frivolous way of talking about the arts outside high falutin’ circles. God forbid artists take their work seriously. If you do you’ll get beaten around the head with the word ‘pretentious’. I think it is possible to talk about art – any art – seriously without being dragged into the unnecessarily complicated language of academia (or the academia adjacent.)

Art is important. It is one of the things that makes us human. It is summed up best in this documentary by Marina Brusnikina, a Russian actor and director: “In the end, art provides us with ground for negotiation and the opportunity to look at yourself from another point of view.” Art is empathy.

This documentary also provides a fantastic platform for explaining why theatre matters as a communal sharing of emotion. But even as I write that sentence my British hackles rise. Is it pretentious? And I ask myself why I feel so defensive about it. Because it is true. I love cinema but I have never felt as connected to anything as I have good theatre. Someone once said – and I can’t remember who – that great theatre is one of the triumphs of mankind, but bad theatre is interminable. This documentary, using Stanislavski as its foundation, does a service to theatre as an art form. It also makes me rage slightly at how expensive and inaccessible it is becoming, particularly in London. But that’s a story for a whole other day.

I read Stanislavski’s “An Actor Prepares” when I studied drama at university. It is the only book on acting I’ve ever read. I haven’t even read any of Stanislavski’s other work. His theories have become a bedrock on which a tradition has been built and, via the US, have morphed into ‘The Method.’ Which you might call the default acting process in 2021, but as this documentary points out Stanislavski himself said: use what method works for you, question every system including mine. Something that gets overlooked.

Marina Brusnikina – who seems to be the source of all the best quotes from the film – remembers a quote from Mahler: “Tradition is not the worship of ashes but passing on the flame.” And I think at its heart that is what this film tries to do. It isn’t here to set Stanislavski in aspic, but to show how his work can be interrogated and interacted with as times change. You can’t underestimate his influence – alongside Michael Chekov – in creating the foundations of modern acting but you shouldn’t take it as gospel.

Of course, I might have misunderstood the whole thing, but I enjoyed what I thought I understood, and it made me think about art and theatre and their importance as ways of understanding ourselves as human beings in a world where we seem to be busy finding the things that separate us as opposed to the things that unite us. Art can change the world. If you let it.
Follow Tony on Twitter @Lokster71
Images - BFI

Russian Film Festival 2021 runs from 12 November - 10 December 2021 and is organised in collaboration with ROSKINO, a state organisation representing the Russian audiovisual content industry internationally with the support of the Ministry of Culture of the Russian Federation and the Russian Cinema Fund. Fans of Russian cinema can claim an additional free month of BFIPlayer - simply add the code RFF21 when you sign up for subscription: https://player.bfi.org.uk/sign-up. Find out more on the BFI Website.
Email ThisBlogThis!Share to TwitterShare to Facebook