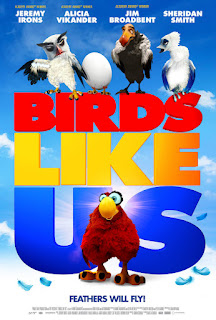 Based on a classic Persian  poem, and the first Bosnian full-length computer animated film directed by Faruk Šabanović and Amela Ćuhara, with a soundtrack by Peter Gabriel, watch the trailer for Birds Like Us...

In the land of Birdabad, a treebound community in the middle of a vast desert, a society of flightless birds exists. Ruled by a tyrannous leader, Kondor (Jeremy Irons) and his carnivore crew, the fruit-eating birds unthinkingly swap their eggs for fruit. But one young couple, Huppu (Alicia Vikander) and Hassan (Kevin Bishop), are determined to defy the system and save their rare chick from this terrible fate…

So begins an ethereal journey through a bizarre yet beautiful universe, as the birds – having been exiled from Birdabad into the terrifying unknown land beyond – team up with a mysterious blind bat (Khalid Abdalla), in a peril-filled attempt to reach the place where the sun sets. Only together do they stand a chance of escape.

Based on Persian poet Farid Ud-din Attar’s masterpiece ‘The Conference of the Birds’, Birds Like Us is a powerful tale of acceptance and coming together to overcome differences – part comedy, part political allegory and featuring a visionary animated style.
Birds Like Us comes to Digital, On Demand and DVD January 25th, 2022.
Email ThisBlogThis!Share to TwitterShare to Facebook