Film - I've Been Trying To Tell You 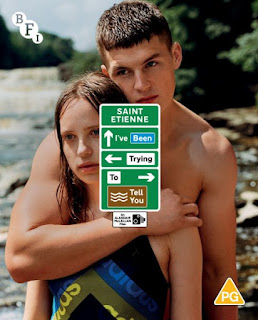 Based on new music by Saint Etienne, and coming to Blu-ray next week, watch the trailer for I've Been Trying To Tell You...

Directed by the acclaimed photographer and filmmaker Alasdair McLellan to accompany Saint Etienne’s first sample-driven album since their 1993 classic So Tough, I’ve Been Trying To Tell You is a road movie like no other.
After a premiere at BFI Southbank and a short exclusive run on BFI Player in September, the film will be released on Blu-ray by the BFI on 6th December, packed with extras including a filmed conversation between the director and Bob Stanley from the band and three new Saint Etienne music videos featuring music from the album of the same name.

Back. Further back. Do you look back on the optimism of the late Nineties as a lost golden age? Or do you see it as a period of naivety, delusion and folly? Do you remember it at all? Through the fog of memory, can you be sure? Alasdair McLellan’s I’ve Been Trying To Tell You, set to the music of Saint Etienne, is immersive and impressionistic, hypnotic in its visual reverie. Filmed in locations across Britain, it’s about misremembrance and the recent past, youth and sense of place, and where we come from. What was lost and what was never there…
Alisdair McLellan said ""Last year I met with Saint Etienne’s Bob Stanley in Saltaire, near Bradford, to talk about working together on a film for their new album. When we met, we found we shared so much in common – after all, Saint Etienne’s music has always conjured beautiful images for me and influenced my own visual style – the project became something bigger. The film ended up being a strange road trip around Britain: from Southampton to Portmeirion to Blackpool to Grangemouth to Scunthorpe to London. It is a film made up of other films; most are an interpretation of my memories from that time, some are borrowed from cinema, others are ‘memories’ of what I wish life would have been. But all of it was important – whether the memories are real or not.”