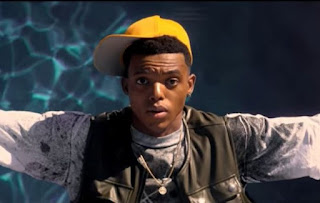 Well, this is a story all about how... a more dramatic reboot of Will Smith's iconic 90s sitcom Fresh Prince of Bel-air is coming to Peacock streaming service next year. Watch the teaser trailer ...

The series, which is based on Morgan Cooper’s popular fan film that re-envisioned the original fun sitcom as a dark and gritty drama, hails from Jada Pinkett Smith and Will Smith’s Westbrook Studios and Universal Television and received a two-season order back in September 2020, when nobody was paying attention. T.J. Brady and Rasheed Newson, whose credits include The Chi and The 100, serve as executive producers and co-showrunners. Morgan Cooper himself directs and serves as co-writer and executive producer.
Set in modern-day America, Bel-Air is a serialized one-hour dramatic analogue of the 90’s sitcom “The Fresh Prince of Bel-Air” that leans into the original premise: Will’s complicated journey from the streets of West Philadelphia to the gated mansions of Bel-Air. With a reimagined vision, Bel-Air will dive deeper into the inherent conflicts, emotions and biases that were impossible to fully explore in a 30-minute sitcom format, while still delivering swagger and nods to the original show.

T.J. Brady and Rasheed Newson, Executive Producers and Co-Showrunners, said, “We have stayed true to the original premise of the legacy series – Will’s life is turned upside down after he is forced to leave West Philly and lands in Bel-Air with its gated mansions and wealth, however, our new series brings Will and the Banks family into the world as we know it now. It’s been incredible to bring these iconic characters to life when you tap them into the cultural pulse of our time. The series was the fabric of so many of our upbringings, tied to memories and the joy of seeing ourselves represented on TV so it is important to us to pay respect to its legacy.”

Morgan Cooper, Director, Co-Writer and Executive Producer added that in drama form, “We’re able to go have tough conversations that challenge perspectives. At its core, Bel-Air is a celebration of the black experience through the perspective of a family,” Cooper added.