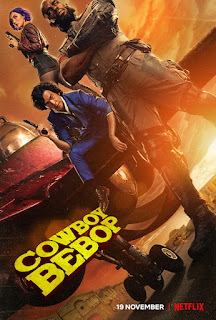 With season one of the live action adaptation of Cowboy Bebop dropping on Netflix tomorrow, read a short Q & A with Spike Spiegel a.k.a. lead actor John Cho ...

Part western, part noir, and part sci-fi space odyssey, the live-action adaptation of the beloved anime series Cowboy Bebop isn’t easy to put in a box. That’s exactly what drew John Cho to the project. “It’s been a dream job in the sense that the show is a mashup of so many genres,” he says. “This feels like a career's worth of roles all in one character.” In the series, Cho steps into the incredibly cool shoes of Spike Spiegel, an impossibly cool bounty hunter, more commonly known as a “cowboy,” with a deadly smile, a wry wit, and style to spare. He travels the solar system with his ex-cop partner pursuing the future’s most dangerous bounties with a combination of charm, charisma, and a deadly fighting style.

Ahead of the show’s Nov. 19th debut, John Cho talked about the “completely unique” world of Cowboy Bebop, training for his big fight scenes, and paying respect to the source material.

How did you first learn about the world of Cowboy Bebop?

I first learned about Cowboy Bebop through the very boring route of having it come through my agents, who sent me the script. I had not heard of it before. I read the script for the first episode, and I was so impressed by it I said, “I have to look at the source material," so I watched the anime. My mind was just blown. I was so impressed. The world is completely unique, completely inventive, funny, and high-stakes. I was fascinated by the setup and all the influences they were pulling from. This show is unlike anything I've personally seen in anime, and now live-action.


How did you prepare physically for the role of Spike?

Working with stunt coordinator Allan Poppleton and the stunt team was so helpful for me in terms of feeling confident about portraying someone as skilled as Spike Spiegel. If you know me from Harold & Kumar Go to White Castle, you'd rightly guess that I'm not a master martial artist in real life. The team helped me with the character in that regard, and gave me a sense of safety that allowed me to ground the character in physicality. They were just the best in the world; they're such great teachers, very inventive, and allowed us to really play within the set parameters. They're also all huge fans of the anime, and each one of these fights was so lovingly created. The thing that they kept searching for in each fight were moments that would distinguish this action sequence from any other action sequence you'd seen in film or TV; the specific Cowboy Bebop personality within these fights. You work and work and work, and you just hope that at the end of the day that I look like the Spike fans know and love. 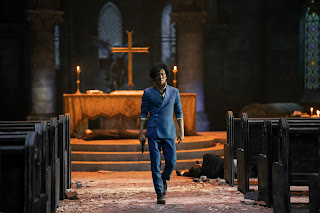 The costume must have helped get into Spike’s shoes — can you talk a bit about crafting Spike’s iconic blue suit with costume designer Jane Holland?

There's a certain attitude to it; sleeves rolled up, collar popped, skinny tie, undone shirt. I would say it's slightly flashy, there's a literal sheen to it. There are some flourishes, some secrets between me and Jane — like the belt buckle, which has a wave on it, flowing like water, and the buttons. Those are details that really ground me and help me to know who I am on set. Thankfully it's very easy to put on. It has a zipper, which is good when you have to go to the bathroom, and it requires only one person to put it on: me.


Can you talk a bit about your experience working with showrunner André Nemec and directors Alex Garcia Lopez and Michael Katleman?

Our showrunner, André Nemec, and our two directors this season, Alex Garcia Lopez and Michael Katleman, gave us a great, open, enthusiastic experience on set. They’re all such fans of the original anime and tremendously devoted to the original material. I leaned on them as fans, because they had lived that experience. They all brought enthusiasm, but in different ways. André was great with the characters, and getting into human motivations. Michael was a terrific scene setter. Alex was always reminding me to bring out the light along with the dark because that’s the overall tone of Cowboy Bebop.


The original anime is so beloved. How has the team worked together to adapt the original show with respect and care?

It was scary as hell. None of us want to mess anything up, because people love this world and these characters so much. But at the end of the day, our excitement overrode our fear. I feel like visually it’s a very faithful adaptation. In terms of the characters, I feel like the goal was to keep viewers connected to the anime but also give them some surprises as well. The entire creative team balanced giving everyone what they liked about the original material, while throwing in things that no one will expect. I think they did a really great job. We go deeper into the characters’ pasts, and they get more backstory. I will say that the music in this show is such an important piece, and when I heard the original anime composer Yoko Kanno was attached to our adaptation, it was a deal sealer for me.