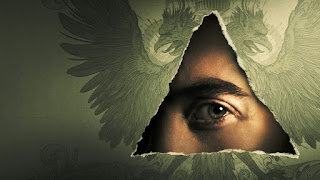 I am an unapologetic fan of Dan Brown’s books. They are like the adventure serials my father had in the 1950’s mixed with an unhealthy dollop of conspiracy theory tied together with 300 pages of exposition. They are entertaining, they do not tax the brain too much and, whilst some are easier to work out than others, there is a slight strand of intellect in the narrative. However, in an unusual twist, the films are better than the books, except Angels & Demons where both are just not good.
In the films, Tom Hanks gets to run around as the smartest yet unluckiest man in the room, gets whisked on an adventure he is just never prepared for, and spends an hour and half explaining to the audience what’s going on. Hanks has our trust as viewers, we know he won’t trick us or lead us down a bad path and the films work better than the books for that precise reason, Langdon in the books is not Tom Hanks. Hanks made three of the then published four books into films, The DaVinci Code, the aforementioned "waste of time and Ewan McGregor" Angels & Demons, and the glorious looking yet most ridiculous Inferno, but when it came time to make my favourite of the books into a movie Hanks and director Ron Howard thought the plot was too similar the other books. Really? The other three books were so different, were they? Personally, I believe they passed on it because it involved running around Washington D.C. on a masonic and political adventure and Howard and Hanks just knew that you would never top Nicolas Cage in National Treasure for that type of adventure, so I never got the chance to see my favourite Brown-written Langdon adventure on screen… Until now.

Available on whatever Peacock is [it is yet another streaming service, Steve, but it doesn’t have enough content to be charge worthy in the U.K so we get it free with our Sky subscription. Whether we want it or not. It’s like when Apple invaded your iPhone and made you listen to U2 against your will – Ed] comes a ten part mini-series with a new Langdon, which is treading dangerous waters, created by the guy who brought the Scream franchise to the small screen. So now I have the excitement of my favourite Brown book finally getting a screen incarnation but the fear that I am going to get a soap opera and will definitely miss Tom Hanks. Let’s see, shall we? 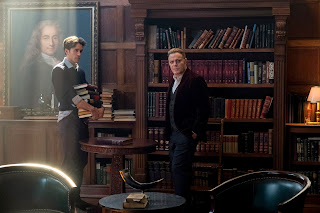 Set years before the events of The DaVinci Code, a young symbologist, Robert Langdon, gets called to meeting with his mentor Peter Solomon at The Capital. Langdon arrives to find a severed human hand with a masonic ring pointing to the painted ceiling and then we’re off on an adventure, solving puzzling riddles and debunking masonic conspiracies as we search for the missing Solomon alongside Langdon, the C.I.A in the form of Inoue Sato, Langdon’s ex-girlfriend and Solomon’s daughter Katherine, Capitol copper Nuñez, all whilst trying to discover who the evil Mal’akh is and trying to put an end to his evil plan to use an ancient myth to become a god.

I really enjoyed The Lost Symbol, and it was mainly because of the changes and no attempt being made to connect itself to the film universe. The younger Langdon, played by the very capable Ashley Zuckerman (Succession) doesn’t try and do a Tom Hanks impression but plays Langdon as he was on the page, intelligent and yet naïve, and very often sarcastic and judging, and he played off Valorie Curry (The Following) really well. There was a genuine chemistry and the changes in the relationship over the years shown through flashbacks adds a layer of intrigue and humanity to Langdon that don’t always get in the films. Eddie Izzard as Solomon is perfect casting with Izzard using that acerbic wit and sharp tongue from stand-up comedy as part of Solomon’s character with aplomb, casting children aside for the betterment of the Masons with almost a glee that you don’t normally see from a supposed victim of crime. Rick Gonzalez as Alfonso Nuñez is good fodder for Langdon’s exposition moments and, as Gonzalez showed in Arrow, he has some acting chops and manages the action like an old pro. C.I.A. analyst agent Sato (Sumalee Montano from just about everything ever made that needs a voice actor) gives you the law enforcement gravitas that is really needed in a Dan Brown story to keep the ridiculousness grounded enough to be almost believable and so our band of heroes are all well cast, each brings something unique to the team, and makes a great ensemble.
Where the films often fall flat though is in their villains. DaVinci had the incredible Sir Ian McKellen playing the duplicitous Leigh Teabing, so that film worked, but McGregor in Angels & Demons was woeful and Ben Foster in Inferno was completely wasted as an actor with a character of zero depth, so I was worried that across nearly ten hours something written by Brown would struggle to get the evil side of the conspiracy right. With a great twist they really pulled it off well, even giving you the reveal a few episodes from the end which, instead of ruining the plot, actually made those last few viewings quite a tense experience. The other part of The Lost Symbol I appreciated was that, with the younger Langdon casting, they didn’t try and fit into the film’s timelines. The Lost Symbol isn’t set in the early 1990’s, it’s today and uses modern technology and science and doesn’t apologise for that which is very refreshing.

There are a few flaws, mainly because there is a lot of changes from the manuscript and not all of them land, but the longer form of television and the refreshing take on a series of books that had got quite jaded made for a great few evenings of entertainment. The Lost Symbol is well worth a viewing but, like the books, switch off your brain and just let the story wash over you. Don’t take it seriously and you’ll have a lot of fun.
Follow Steve on Twitter @STBwrites
Images - Sky
Email ThisBlogThis!Share to TwitterShare to Facebook