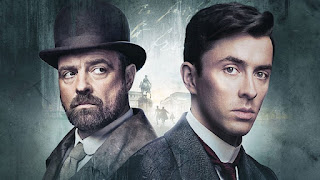 The second series of Vienna Blood will air on BBC Two this winter. Read an interview with
Frank Tallis, author of the Liebermann novels on which the series is based...

Starring Matthew Beard and Juergen Maurer, Vienna Blood is set in 1900s Vienna - a hot bed of philosophy, science and art, where a clash of cultures and ideas play out in the city’s grand cafes and opera houses.

Hilary Bevan Jones, Managing Director of Endor Productions, said “To have had the pleasure of filming in the magical city of Vienna for a second series was such a treat, a real feast for the eyes, not only for us as programme makers but - we hope - for our viewers too. We have three more compelling stories written by the incredible Steve Thompson and once again inspired by the world Frank Tallis created in his Liebermann novels. With Matthew Beard and Juergen Maurer heading our fantastic international cast and Robert Dornhelm weaving his directorial vision we have been spoiled. We look forward to revisiting the love and warmth of the Liebermann family and new adventures with our duo Max and Oskar."

Rodrigo Herrera Ibarguengoytia, Senior Acquisitions & Co-Productions Manager at Red Arrow Studios International, adds: “We are delighted that Vienna Blood is returning to the BBC. The series has been licensed across every continent and we are thrilled with how it has captivated audiences around the world. Endor Productions, MR Film and the entire creative team have delivered an exceptional second season and we are excited to be bringing these gripping new stories to our broadcast clients and the show’s growing fan base.” 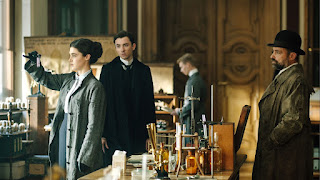 Here's the interview with Frank Tallis, author or the Liebermann novels.
How did you feel about the reception of the first series of Vienna Blood?

Very happy, naturally. Novelists are unaccustomed to reaching an audience of millions in one evening. The idea of Max finding his way into so many homes in a single 90-minute episode was very exciting.


Why do you think Vienna was such a cultural phenomenon at the start of the 20th century?

Largely because the Viennese loved socialising. The coffee houses and salons were places where people from all walks of life (with different interests) gathered to talk and exchange ideas. This proved to be very fruitful. Gustav Klimt, for example, was invited to an autopsy by the professor of anatomy at the medical school. Klimt attended the autopsy so that he could better understand the ‘truths’ behind the superficial appearances of the human form.

Cross-fertilisation became the engine of Viennese creativity. Freud borrowed the techniques of poets and novelists in the service of science when he wrote his early case studies. Then, poets and novelists borrowed Freudian ideas in the service of art. Studies in Hysteria became a reference work, not only for doctors, but for authors, playwrights, and theatre directors.

The first episode of the second series, The Melancholy Countess, draws on your novella of the same name. What lead you to write a novella this time rather than a novel?

Actually, I didn’t decide to write a novella - I was asked to write one by my publisher in New York. The idea was to promote the Liebermann novels by publishing a low-cost novella on Amazon. I might publish The Melancholy Countess as a free e-book in the UK. Writing a short Liebermann story was a salutary exercise. I forget which famous novelist said that he didn’t have the time to write short stories but whoever it was he was very perceptive. Getting a short story to work requires a lot of thought and effort. Shorter forms are less tolerant of longueurs and authorial self-indulgence. Which is probably why there aren’t that many truly great novellas.

The Viennese, incidentally, were masters of the shorter literary forms. Arthur Schnitzler and Stefan Zweig wrote some of the finest and technically groundbreaking novellas of the 20th century. They both corresponded with Freud and made use of his ideas in their work. 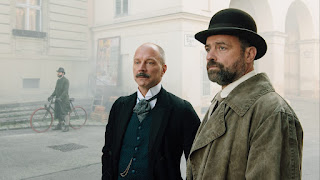 During the filming of the second episode, which draws material from your novel Fatal Lies and involves a terrorist plot, there was an actual terror attack in Vienna. Do you think that Europe has laid to rest its ghosts of the early 20th century?

Well, Liebermann’s Europe suffered two world wars. Things are a great deal better now. But has Europe laid to rest its early 20th century ghosts? Probably not. Nationalism and extremism are still part of the political landscape. Migration across Europe is still a problem - or at least, it is still perceived as a problem. Antisemitism is still a problem. And so on. This morning [1 June 2021] The Guardian published an article about the recruitment of British soldiers into a neo-Nazi group called National Action; a cardboard swastika was displayed in barracks in Cyprus. If the quality of political leadership and debate doesn’t improve soon - on both the left and right - I fear that some of the mistakes of the past might be repeated once again.

Max’s crime solving technique draws on his psychoanalytic skills. Is there a similarity between the skills involved in detection and psychoanalysis?

Oh yes. The thing I miss most about seeing patients - I’m a full-time writer now - is the detective work. Most psychological problems are quite straightforward, but complex cases require detection skills: identifying clues, following leads, digging deep for answers. Retrieving a repressed memory that explains a symptom is analogous to the culprit being exposed by Poirot in the drawing room! It can be as thrilling and as intellectually satisfying as the last scene in an Agatha Christie. A final piece of a puzzle falling into place.

The third episode of the new series is based on your novel Darkness Rising and explores religious conflict in different guises particularly antisemitism. Is religious fervour a subject which you’re especially drawn to explore?

I’m very interested in religion and how belief systems develop. Although I am not anti-religion, I am anti-irrationality, and antisemitism has always struck me as a particularly sickening example of irrationality.

When I started writing the Liebermann series in 2003, antisemitism seemed more ‘historical’ than it does today, which is both sad and worrying. Only a few weeks ago, I saw some disturbing images of a protest march in London which was openly antisemitic. The media seemed to respond with alarming complacency. It gives me no joy to say that with respect to antisemitism, the Liebermann books are more relevant in 2021 than they were at the time of writing. 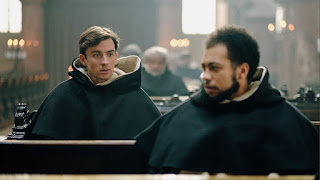 Each book in the series takes us to a different side of Vienna. In this second series we get monastic life, a high-class hotel and the world of imperial politics. What elements are you looking for when you decide on the settings of your books?

For me, setting is everything. First there is the broad, colourful canvas of Freud’s Vienna. Then there is usually some form of ‘closed’ community - anything from a secret society to a fashion house. There is the world - and then smaller worlds nested within the greater world. Once I’ve got a setting, plots arise spontaneously. A setting will suggest specific themes for exploration, and impose helpful limits. The dramatic space in which the characters operate will be clearly defined.

Fortunately, Freud’s Vienna was made up of many worlds. I was spoilt for choice! The worlds of the opera house, the military academy, the palace, the hospital, and so on. And they really were like worlds in Freud’s time - not just places. The imperial court, for example, used its own dialect. We think of detective fiction as a genre driven by a big central character. But, in reality, almost all of the great fictional detectives operate in distinctive settings. You need a distinctive setting for a big character to get sufficient traction to move the story forward.


Do you have plans to write more Liebermann novels?

I’d love to write more Liebermann novels, but whether I do or not rather depends on opportunity and time. For the past five years I’ve been otherwise engaged writing psychology books - a clinical memoir, a philosophical book that summarizes what the great psychologists can teach us about coping with life - and I’m currently working on a book called Mortal Secrets: Freud, Vienna And The Discovery Of The Modern Mind. It’s several things: a Freud biography, a book about Freud’s cultural context - and also, a book about how Freud and his Viennese contemporaries influenced how we think and live today.

When I’ve finished, I’d like to turn it into a TV documentary. If I do get an opportunity to write more Liebermann books, then it would be interesting to move him forward in time. A WWI trilogy could be quite exciting. I see Max as a medical officer on U-5, a real Austrian U-boat that was commanded by Georg von Trapp, who later became famous as the patriarch of the von Trapp family singers. Yes, that’s right, the family who inspired The Sound Of Music. This set-up would lend itself to some amusing exchanges. Max often pops into my head uninvited. Only this week he materialized – not in Vienna - but in a Cairo nightclub in the 1920s and I wondered what on earth he was doing there. I’d have to write another novel to find out.

Images and info - BBC
Email ThisBlogThis!Share to TwitterShare to Facebook