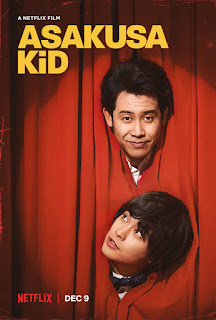 Based on Takeshi Kitano’s memoir, Beat, and coming to Netflix on 9th December, Asakusa Kid is a moving tale of the living legend, in a tale of dreams, failures, love and loyalty of Kitano with his mentor Senzaburo Fukami...

Legendary comedian and auteur Takeshi Kitano is known in Japan and around the world, but lesser known are his mentor and his friends who helped him reach such heights. Studying under Senzaburo Fukami, a largely forgotten comedian who once mastered the stage, and with help from his fellows, he starts to carve out his own path to stardom, only to discover too late the price of his fame and success -- the people who helped get him there.
Set in mid-1960s Asakusa, a somewhat seedy part of Tokyo, Kitano dropped out of college in search of something better, and took a job at the Asakusa Furansu-za theater known as a hall of fame for strip shows and comedy, where he soon became an apprentice of the legendary comedian Senzaburo Fukami. Fukami was the comedy master behind other famous comedians such as Hachiro Azuma and Kinichi Hagimoto, who disavowed television and only believed in the live stage. Kitano worked hard under Fukami to polish his craft and achieve his dream of becoming a successful comedian. However, as home television became ever more popular, live comedy gradually fell out of favour.

With a screenplay written and directed by Gekidan Hitori,  the film stars Yo Oizumi as Senzaburo Fukami, Yuya Yagira as Takeshi Kitano, Mugi Kadowaki as Chiharu, Nobuyuki Tsuchiya as Beat Kiyoshi and Honami Suzuki as Mari Fukami.

[And yes, there is an English dubbed version if you must - Ed]