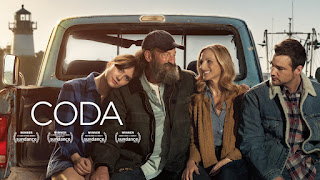 With the film getting nine Hollywood Critics Association Film Award nominations this week, as well as the cast getting this year's HCA’s Spotlight Award, Kraig Taylor-Bryant watched CODA...

I never thought to watch anything on Apple TV+, but that’s definitely not because I doubt the content on Apple’s streaming service. I think it’s more about the majority of the film and TV library on there being “exclusives”; unlike Netflix or other streaming services you won’t find that classic films or mainstream shows are part of the Apple TV+ model.

So, what changed? Well, I came across a three-month trial, so I thought I’d watch Sundance award winner CODA* and I have to say it doesn’t disappoint.

CODA is the story of Ruby Rossi (Emilia Jones), a young woman with the ambition to become a famous singer. Feeling uncertain of her talents, and living in a hard of hearing household, her parents and her brother Leo (played by hard of hearing actor Daniel Durant) are concerned about if she can truly make it as a singer. Also, being the only one in her immediate family born with hearing, she is caught in a struggle to balance her social life, her aspirations and helping her family communicate with the locals.

It’s important that the film shows how difficult it can be for her family to cope in their hometown, when those around them don’t understand sign language. The film achieves it best when the sound cuts out entirely, to give the audience some perspective of what Ruby’s family must be going through, such as when Ruby’s brother is trying to socialise with other fisherman at the local bar, or when her parents, Frank and Jackie Rossi (played by Troy Kotsur and Marlee Matlin, both of whom are also deaf or hard of hearing) are attending Ruby’s School performance.

Not only through sound does the film help us relate to the Rossi family, but it’s also just through them being a normal family. The parents will have their moments where they will say or do something embarrassing when their kid has a friend over, or the brother might be jealous of the younger sibling if they have a talent (in this case it's singing for Ruby). I think it’s by expressing how normal a hard of hearing family is, to an audience that might be unfamiliar, that a story like this truly shines, because it shows we all have our similarities and we all have our differences, but it speaks volumes that the film must also show some of the more unique struggles that this family and others have to deal with.

Their struggles in communicating with others forms a barrier between characters throughout the film, evidenced by how Ruby’s family get ripped off by the ones buying the fish or when we see Ruby constantly treated differently for simply being a part of that family. It seems clear that Frank knows this because of his rebellious attitude towards those around him, but after he begins to realise that the rest of the fishing workforce are going through the same struggles as him, only then do they find common ground in his speech to the council, and we see some of the barriers being broken. 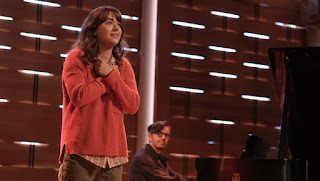 The music is also a powerful tool in the film because, whilst it separates Ruby from her family in the beginning, it also brings them together in a powerful way. When the Rossi family attend Ruby’s concert performance we get to see it through their eyes, and they get to see how their daughter’s music is making everyone around them feel, which in turn helps them in understanding and connecting with Ruby more.

I think that’s even where the choice of using “both sides now” as Ruby’s song shows some importance, because in a way it feels like she’s only loved by her family and not the other “side”, that being everyone else who separates themselves from the Rossi family. It only becomes more powerful when Ruby finds someone who sees her family as just like any other, or when Ruby’s brother starts a relationship with Ruby’s school friend because it’s through forging these relationships that the community comes together.

It’s all the more the more essential that this film cast hard of hearing actors to fit the Rossi family roles (with the exception of Ruby), because naturally it fits the message of how it’s the hearing that need and can do more for the hard of hearing. It’s like Ruby’s brother Leo puts it “let them figure out how to talk to deaf people, we are not helpless”. So, in short, this movie is important in more ways than one.

Did I enjoy the film? Yes, I felt that the films’ choice of a hard of hearing family not only sets up the CODA Ruby as an underdog within the small-town setting but also uses this to show the boundaries we put up when we don’t learn sign language to interact with them. Whilst advertised as a comedy, the film feels like an emotional rollercoaster, it made me sad, and it left me in tears of joy and kept me believing in Ruby’s dream to become a singer.
I think between a powerful film like this, and numerous stars such as Tom Hanks being involved in Apple TV+’s exclusives, it’s well worth giving the service a try if you haven’t already, there are some real gems like this one that you just shouldn’t miss.
Follow Kraig on Twitter @Kraigandhismac
[* Side note - CODA stands for Child of Deaf Adults - Ed]
Email ThisBlogThis!Share to TwitterShare to Facebook