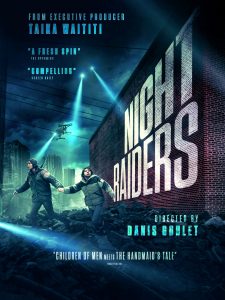 Out on Digital on Monday, thanks to Signature Entertainment, watch a clip from the dystopian sci-fi film Night Raiders...

The year is 2043, and North America has been shattered by war. The totalitarian regime that remains now forces children into brutal military training to fight in the futile war.

To save her daughter, Waseese, from this fate, Niska has been hiding them in the woods, living a reclusive life dominated by fear of discovery. When the pair are forced into the remnants of the city, Waseese is captured along with several others. Niska finds herself among the ‘Night Raiders’, a group of indigenous rebels who plan to free their children.
A relentless and thought-provoking, dystopian thriller from executive producer Taika Waititi, Night Raiders, which features both English and the indigenous Canadian Cree language, is written and directed by Danis Goulet and stars Elle-Máijá Tailfeathers, Brooklyn Letexier-Hart, Alex Tarrant and Amanda Plummer.