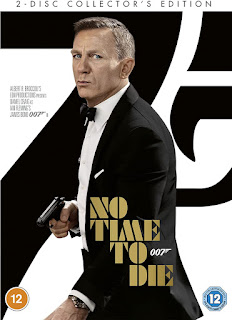 To coincide with the release of No Time to Die on DVD today, Oliver Kent has some thoughts about where the Bond franchise could go next...

It is 2024, the cinema darkens and the familiar gun barrel moves across the screen. Bond. Blood. And a fade up on ... what?

Following Daniel Craig's rather definitive departure from the 007 role in No Time To Die, there are two directions the Bond franchise could turn as it moves into the future, either set a series of movies in the period of the novels, or continue forward with Bond always being set in the present.

I might be in the minority - but my choice would be the latter.

Much more important is the question of who they cast as Bond. There are a lot of great candidates - Idris Elba, Tom Hardy and Henry Cavill to name a few, but my personal favourite is Robert Pattinson, admittedly an outside choice and not one that I considered until watching Tenet, but with The Batman debuting in March 2022, there is the possibility that Pattinson could become a bankable action movie lead by the time a casting decision is made. And for those of you who say that he's too young, he would be 38 when our hypothetical Bond 26 is released, the same age that Daniel Craig was when he debuted in Casino Royale.

Casino Royale proved that you don't need Moneypenny, Tanner and Q (although the character of Villiers, played by Tobias Menzies serves much the same function as Tanner and Moneypenny) but you do need M, someone to give Bond his assignment and castigate him for his reckless behaviour when appropriate. Much like Judi Dench moved from the Brosnan Era and into the Craig Era, so too would Ralph Fiennes move into the Pattinson Era.

Pattinson vs Elba anyone?

So what might this movie be like? By 2024, it will have been a quarter of a century since The World Is Not Enough and the last good old fashioned nuclear heist, so it's about time for that plot trope to be revisited; if No Time To Die lifted heavily from the novel of You Only Live Twice and On Her Majesties Secret Service, then perhaps this movie might borrow liberally from Thunderball, The Spy Who Loved Me and Tomorrow Never Dies. A friend of mine said that he would also use the latest series of Alex Rider as a template for a future Bond film - a slow build up and lots of personal relationship stuff. In contrast, my templates would be Mission Impossible: Fallout and Tenet amongst others - and it's the latter direction that I suspect the next Bond film will indeed turn.

Neal Purvis & Robert Wade have a long history with the franchise (from The World is Not Enough coincidentally), and it is likely we will see their return for Bond 26, but the eventual Director will have an influence on the script too. Cary Joji Fukunaga has a co-writer credit on No Time To Die, for example, and rumours suggest he has been approached by EON to helm Bond 26 as well - so we could be looking at a nuclear heist with the vibe of No Time To Die.

In the meantime, we should enjoy No Time To Die for what it is, a bloody good action movie and a fitting close to the Craig Quintology, a Bond film that nods to the past whilst setting us up for a new and interesting future. Whenever that may come.
Images - Amazon/IMDb
Email ThisBlogThis!Share to TwitterShare to Facebook