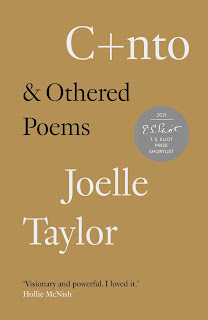 Tony Cross is reading all the books shortlisted for this year's T.S. Eliot Prize. Here are his thoughts on C+nto & Othered Poems by Joelle Taylor...

a loose stone between hands. "
from Butch Proverb No 3

C+nto and Othered Poems is fantastic. It is the perfect demonstration of politics as personal and the personal as politics. It is also a fine example of the poet as witness. If you read my reviews, I often quote Anna Akhmatova's 'Requiem' when she is asked, "Can you describe this" by a nameless woman queuing with her outside a Leningrad prison. Akhmatova says, "I can". Joelle Taylor here describes this here. The this being the culture of butch lesbians in the 90s.

It is part protest, part elegy. It is part tribute, part memoir, part an attempt to translate their experience and part a call for unity in a world where the LBTQ community is increasingly under threat. Indeed, for me the most moving part of this collection are three poems towards the end: "Black Triangle", which refers to the Black Triangle lesbians were made to wear in Nazi Germany; "December", which starts with Chechnya but extrapolates her own disappearance and "Eulogy". All three are moving and all three remind us of the price some people pay for just wanting to be themselves.

In her preface Taylor says, "This is a book of silences."

And it is. Silences and absences.

"the last part of me to disappear
my absence."
from December

I bang on in my reviews that for me poetry isn't about technique. Partly because I don't think I have the knowledge or vocabulary to explain that technique. For me poetry is visceral and emotional. I love the poetry that makes me feel something or that makes me get close to understanding something at a more emotional level, which makes me sound like an emotional vampire living vicariously on other people's grief and misery. But that's not what I mean.

I can't know what it is like to be a butch lesbian in the 90s, but I can bloody try to understand. Now Joelle Taylor might not give a toss about whether I understand, but I'm still going to try.

I think this is a fantastic collection. I thought so as soon as I began to read it. It pulls you in and the language and images do a job on you. Based on how I judge poetry this is a five-star smash.
Follow Tony on Twitter @Lokster71
About the T.S. Eliot Prize