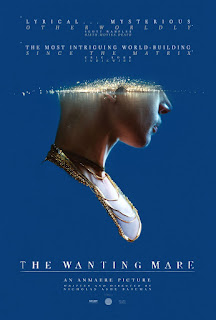 Coming to Digital HD next month, thanks to Bulldog Film Distribution, watch the trailer for sci-fi fantasy epic The Wanting Mare...
Press Release
The Wanting Mare, the directorial debut of Nicolas Ashe Bateman, a visual effects artist known for his work on A24’s The Green Knight, blends science fiction, drama, fantasy and romance in lyrical style to create a bold and atmospheric new cinematic world.

In the world of Anmaere, north of the city of Whithren, wild horses run through the moorlands and up the coast. These horses are the city's most valuable export, and as a result are hunted, trapped, sold and shipped across the sea once a year. For those in Whithren, this trade creates exciting possibilities: the chance to escape their constantly sweltering city to head across the sea. Meanwhile, in a small house just north of the city, a line of women pass a single dream through the generations. They inherit it from mother to daughter; a memory of a time where magic and myth were alive in the world.