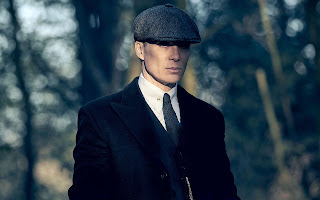 "One last deal to be done." In case you missed it over the weekend, watch the trailer for the sixth and final series of Peaky Blinders...

Yes it's been officially confirmed that the upcoming 6th season is going to be the last one, even though a 7th series was rumoured at one stage, however there is some hope on the horizon.

Show creator Steven Knight has promised fans that the series will return with “a bang”, saying in an interview: “We believe this will be the best season of all and are sure that our amazing fans will love it. While the TV season will be coming to an end, the story will continue in another form."

He went on to say “COVID changed our plans. But I can say that my plan from the beginning was to end Peaky with a movie. That is what is going to happen.”

In the meantime, here's what we've got to look forward to - "coming soon!"
Image - BBC/Caryn Mandabach Productions Ltd./Robert Viglasky
Email ThisBlogThis!Share to TwitterShare to Facebook