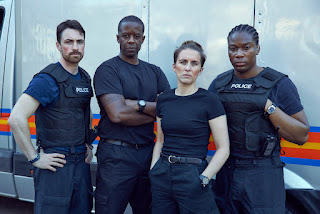 With the high-octane six-part thriller series coming to ITV on 23rd, read an interview with the writer of Trigger Point, Daniel Brierley...
Press Release
Trigger Point focuses on the officers who risk their lives daily on ‘the long walk’ towards danger, turning the spotlight on counter terrorism policing and the extraordinary work of the Metropolitan Police Bomb Disposal Squad. For them, death is always just a heartbeat away.
Vicky McClure (Line of Duty, I Am Nicola) plays front line officer Lana Washington, who is an experienced bomb disposal operative, known as an ‘Expo’ and Adrian Lester (Life, Trauma) plays Joel Nutkins, who works alongside her. Both ex-military, the pair are close, having served together in Afghanistan.
When a terrorist campaign threatens the capital over the summer, the Expos are at the forefront of urgent efforts to find out who is behind the bombings before fatalities escalate...
Further cast includes Mark Stanley (Honour) as DI Thom Youngblood, Warren Brown (Luther) as Karl Maguire, Kerry Godliman (After Life) as Sonya Reeves, Cal MacAninch (Des) as Lee Robins SCO19, Manjinder Virk (Midsomer Murders) as Samira Desai SO15 and Ralph Ineson (The Capture) as Commander Bregman.
Trigger Point was commissioned for ITV by Head of Drama, Polly Hill, who oversaw production from the channel’s perspective. Jed Mercurio executive produces the drama alongside Jimmy Mulville (Derry Girls, Bloodlands, Flack) Mark Redhead (The Murder of Stephen Lawrence, Bodies, Bloodlands) and Jessica Sharkey (Derry Girls, Bloodlands) for HTM Television, with Julia Stannard (Vanity Fair, War and Peace, The Great Train Robbery) producing.
The series is directed by Gilles Bannier (Marcella, Tin Star, Spiral) and Jennie Darnell (Line of Duty, Holby City, Death in Paradise)
Where did the idea come from for Trigger Point?

I've got two young children who basically never sleep, so I never sleep either! As such, I've become quite obsessed with YouTube and I've even got to the stage now where I'm too tired to decide what I'm going to watch, so I let it choose for me. That’s how I came across a 1970s BBC documentary called The Long Walk about bomb disposal operatives in Northern Ireland, and it was incredible. I've always been fascinated by the mindset of people approaching danger, the people who run towards the problem rather than run away from it, because that’s counter to all our human instincts. If I saw something dangerous in the street, I would turn and walk in the other direction, so these operatives were training themselves to suppress something really natural. I thought that was a really fascinating jumping off point for a drama and I wanted to get inside their mindset.


It seems amazing that a drama hasn’t been made about this before.

Definitely. I assumed there would be a thousand bomb disposal TV shows already, but I don't think there are, so it was just very fortunate that I came up with this idea when I was already talking to Jed Mercurio about other things. He was a great person to be able to bounce the idea off and it went from there really.


How did you come up with the characters of Lana and Joel?

Lana is the centre of the story for me, she's real, vibrant and complicated. She really fits in with the central paradox of the story, how do you train yourself to be this cool in the face of danger and then survive in the real world and have relationships?

For me you can't really have Lana without having Joel, they are part of a double act. He's the only one who sees all the sides of her - she never has to pretend around him and he gets her. They have this symbiotic relationship and they both complete the other. So I couldn't have Lana, who is raw, vulnerable and wears her heart on her sleeve, without having a character like Joel who is the opposite. 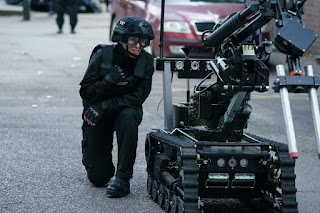 How much research went into telling this story?

Once I’d had had the initial idea, I spoke to Jed, who gave me the number of an expo, who he worked with on Bodyguard. I spent some time with him at a secret base in London and really got some insight into the technical elements of the job. Most importantly for me, I got to understand who they were and how they did their job: the pressures, working shifts, sleeping on sofas etc. I spent a lot of time in the locker room with them.

I didn't go out on any active ops because the insurance would have been crazy, but I've seen them training and the surprising thing for me was that the prospect of a bomb was so banal to them because they've been training their entire life for this. And it’s juxtaposed with the extreme boredom of sitting and waiting - these guys aren't called out of their office unless there is extreme danger.

It was really challenging to write a script with so many technicalities in it, because it's not my world, but I wanted to be honest about what they do and our expos really chipped in and helped me out, draft after draft. That meant I could really just let my imagination flow and then come back to the experts and ask if certain things could really happen.


Were you mindful that the subject matter of Trigger Point is quite sensitive?

Of course, we knew that we were dealing with subjects that are real and raw, and it was important to make sure we gave enough balance and a fair portrayal of all sides. The series is set in London during a terrorist campaign and a hotly contested election, so we really had to make sure it felt real while also being sensitive. There was a duty to be honest and to show things how they really are. I've been in London for 20 years now and I remember 7/7, London Bridge and Parson's Green, so you tap into those tensions, the memories of the first time getting back on the tube, or seeing the 38 bus in pieces. There’s so many things happening around the world all the time and for writers we have to tap into it.


This is your first ever TV script, what an achievement!

It still really feels like a dream and I genuinely don't know how to react. I feel like any moment my mum is going to shake me awake and tell me it's time for school. There have been a few close-run projects, with shows nearly getting made but falling through, so it feels surreal that this is happening, especially as I worried the pandemic might stop it being made. I’ve been working as a journalist and TV producer up until now, just about make enough money to survive, so Trigger Point feels amazing. It's been an enormous learning curve for me - there are moments when I've written so many drafts of the same episode that I feel like I'm going blind, but my script editors are amazing, they've just helped me so much.


Can you tell us more about your relationship with Jed Mercurio?

I got chatting to him at the Edinburgh TV Festival years ago and we stayed in touch, then I pitched him this idea. He's wonderful, very funny and I get on very well with him. I think we have similar taste in stories, so that helps, and he’s a great mentor. He and the other execs give me feedback on every draft and he understands the story in a very profound sense. We’ve got some cliffhangers in the series and that is very much a Jed thing! I was also lucky enough to do some story sessions with John Yorke, who told me that if you can end the story with people wanting more then that's exactly what you have to do. 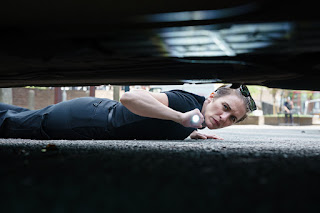 You must be thrilled with the casting for Trigger Point?

It's crazy, I did genuinely write this with Vicky McClure in mind, so to have her and Adrian Lester as Lana and Joel, it’s astonishing. Hearing this cast read my lines out loud was just so surreal - seeing sets erected, streets closed off, catering vans arriving, whole estates shut down and people hanging around just because YouTube decided that I should watch one clip at 2am, it’s amazing! I now feel guilty too, because I’ve discovered fantastic new actors and I want to make their roles much bigger!


Do you see it as a returning drama?

Very much so, because Lana is such an involving person and throughout the first series she's really finding herself. There are lots of places for her to go as a character and I really want to follow her journey. Plus, the world of bomb disposal and counterterrorism is a really exciting one for a drama. I hope the audience is drawn into the world we've created, and that it feels tense, exciting and real.


Where and when do you write your scripts?

It's been so full on, and I find it difficult to work at home, so I have an office in Hackney that I go to every day, which is lovely. I try to make it as much of a nine to five job as I can, but at some points I’ve been writing 24/7. I remember going to see my mum and dad with the kids one weekend and I didn't say a word to them, I spent the entire time working and rewriting. When we wrapped filming I suddenly had time to think for the first time in three years, and it felt very strange!


Have you given your family a sneak preview of the series yet?

I've shown my partner the first three episodes and she's a big fan. I saw my mum a couple of weeks ago and I was going to show it to her, but she doesn't really like scary stuff, so I'm not sure if she's going to watch! She's really into a show called Hudson & Rex about a dog that solves crime, so if I could do a live action Scooby Doo instead my mum would be so happy!