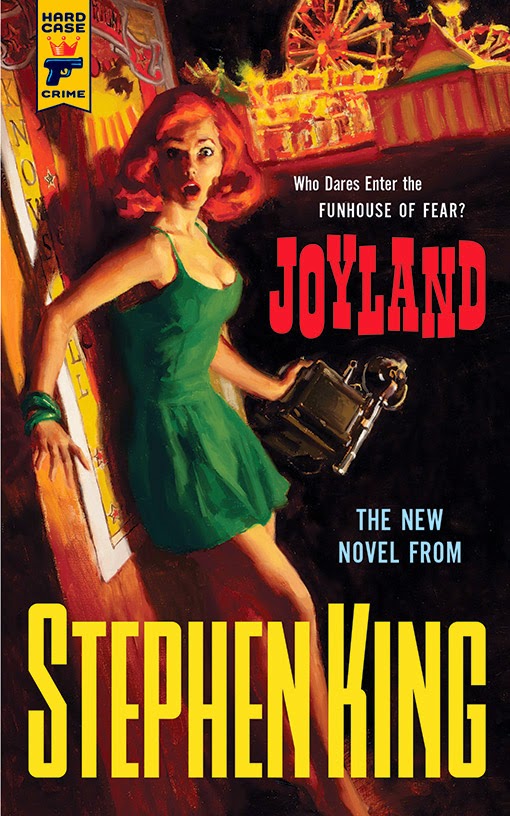 
Set in a small-town North Carolina amusement park in 1973, Joyland tells the story of the summer in which college student Devin Jones comes to work as a carny and confronts the legacy of a vicious murder, the fate of a dying child, and the ways both will change his life forever.

After dreaming of a life with his love Wendy but bored of paying his way through school by washing dishes in the campus canteen, Devin Jones takes a Summer job on the coast at the Joyland theme park. There he makes friends with Tom Kennedy and Erin Cook, who have also taken a job at Joyland. The problem is years before Joyland had been the scene of the murder of a young woman named Linda Gray whose ghost is said to be seen at the Horror House. He also befriends a young boy, named Mike Ross and his mother, Annie. Their lives all become entwined when Devin decides to investigate the mystery of Linda Gray's unsolved murder by the "Carny Killer".

What King has produced is a masterpiece of storytelling, just not the story you were expecting. It wants to be a crime novel. It wants to be a ghost story. But it is both of those and more. It is a tale of first love and first loss, of friendships, of the events that bind everlasting friendships, of being a young man growing accustomed to age and relationships. King has always written great characters but I think the more relatable ones are in his non-horror works. The Shawshank Redemption was character all the way. The Green Mile similar. Here we are in The Body (Stand By Me) territory. A coming of age story shrouded in tragedy. Everyone remembers the first heartbreak they suffered and to relive that fleshed out on the page was as difficult as it was intriguing. It was the relationships that gripped me through this novel though.

Devin Jones' interactions with similar aged friends was one thing but the way he played off his more senior work colleagues was as beautiful to read as the way he felt about the children he entertained. The friendship struck with sick boy Mike Ross was heartbreakingly beautiful as was the thawing of Mike's mother Annie's emotions as Dev became part of their lives.

Yes, there were fortune tellers and a ghost and a pretty good good crime mystery but, even better, there was depth.