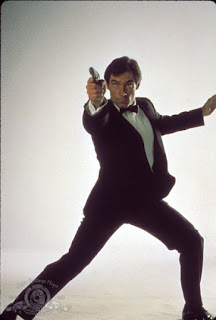 Daniel Craig is just Timothy Dalton 2.0 explains Steve Taylor-Bryant in his defence of a much maligned James Bond...


Before I wax lyrical about my favourite Bond I should maybe explain my thoughts on the film going public. To those who don't like Dalton and prefer another incarnation of the world famous spy that's fine, your opinion is of course valid and taste is a very personal thing. But! To those who think he brought nothing to the franchise and yet still love Daniel Craig's Bond I have to say I don't think you understand how you can't have Craig without Dalton so maybe you should revisit his two glorious films? Now that's off my chest please excuse this love letter to a great actor and numerous A-Ha references.

A change was desperately needed in the Bond franchise. The very good View to a Kill (see Barnaby's thoughts here) had seen an ageing Roger Moore relying too heavily on his smarmy humour to carry of a suave British agent and, now I'm older looking back on the films before Dalton took the helm, I can see that Bond had become a little ridiculous. That's not to say the films before weren't good but, from Connery's debut through to Moore's exit, the plots became progressively more stupid (Bond in space? Really?!) and the humour had diminished to almost sitcom levels. Whoever took over the License to Kill was on a hiding to nothing with critics and fans alike but sometimes you just have to be radical and take a step outside yourself for the good of the future.

The first of Dalton's adventures, The Living Daylights, was actually a commercial success, making a lot more money than first predicted, and relied heavily on the Cold War stories the world was still obsessed with in the 1980's. The last film to use a title from Ian Fleming's books until the 2006 reboot of Casino Royale, The Living Daylights was a superb short story that actually played out during the first portion of the film and saw those dastardly Russians as the main threat to world peace. 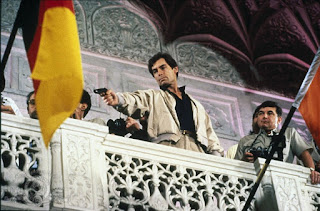 After 004 is killed, Bond is tasked with aiding the defection of a General, Georgi Koskov, from the infamous KGB by sneaking him out of a concert in communist controlled Czechoslovakia. Bond disobeys orders to shoot a potential assassin when she turns out to be a gorgeous cellist in the orchestra, instead shooting the rifle out of her hands, before using a pipeline to smuggle Koskov first into Austria before arriving for the debrief at MI6. Smert Spionam (SMERSH), death to spies, has been brought back by the new despotic General who now heads up the KGB, Pushkin, but despite being given the job of killing Pushkin Bond still has a few doubts about Koskov's testimony. Doesn't matter though as Koskov is snatched from the government safe keeping and reportedly sent back to Russia, so Bond just has to rely on good old fashioned revenge since Smert Spionam was also a note left on 004's body, rather than accurate intel and facts.

After a tryst with the cellist, Kara Milovy, and a conversation with Pushkin, Bond realises that Pushkin is actually a reformist and it was Koskov all along being naughty, embezzling KGB funds and the like. Bond and Pushkin fake an assassination on Pushkin but Milovy has also been naughty, contacting Koskov and having Bond captured. The plan backfires on Milovy when they land in Afghanistan and Koskov hails her with Bond. Koskov though has also double crossed the Mujahideen over opium profits and arms, so the local leader releases Bond and helps him smuggle a bomb aboard the opium plane before Bond then has to use it to blow up a bridge and help the Mujahideen after they end up in a battle with the Russians. Bond kills a traitor, Pushkin finally arrests Koskov, and Milovy becomes a world class cellist after a deal with the British for her freedom.

The Living Daylights saw a harder edge to Bond and, whilst Dalton still had the typical love interest and one liners, he was a lot more serious in the role than Moore before him allowing for a more convincing portrayal of an uber spy. The use of the KGB, Afghanistan, and the Mujahideen was timely, with the iron curtain still up and Russia's conflict still in the news, which helped to ground a Bond adventure in a better sense of reality given what had come before (Moonraker I'm looking at you!). Bond's new hardness wasn't for everyone and was a definite departure from Moore's schtick and Connery's brooding sex appeal but it reinvented a franchise that was primarily about a spy with a licence to kill.

Speaking of a Licence to Kill we move into what would unfortunately be Dalton's last outing as James Bond 007. License to Kill again made good money for EON in 1989 but, despite John Glen directing for a fifth time on the spin, the departures from the norm were too much for many fans to bare. No Fleming title, although part of a novel and a couple of short stories inspired the screenplay, no John Barry, although Michael Kamen did all right filling some rather large shoes, and no license to kill... Wait ! What? That's right no license. This was the change too far for some sections of the media and fanbase, as we see a Bond suspended from MI6, his licence revoked (the original film title until a change during production) as he goes on a vengeance mission trying to kill a drug dealer who murdered his CIA friend Felix Leiter's wife. 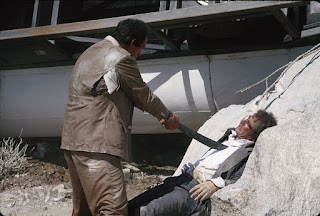 On his wedding day, ex-CIA agent and now DEA operative Felix Leiter takes best man Bond to capture drug baron Sanchez before parachuting in for his vows. Sanchez offers a reward to whoever frees him and this happens, leaving Sanchez to attack Felix and kill his new wife. Bond refuses to do as MI6 ask and decides revenge on Sanchez is more important than his government job, getting suspended and stripped of his licence to kill, effectively declaring Bond a weapon. When Bond's ally is killed by Sanchez's henchmen, Bond teams up with Pam Bouvier, herself ex-CIA and, pretending to be an assassin for hire, infiltrates Sanchez's inner circle. Bond learns from Sanchez that cocaine can be hidden in petrol and that they are smuggling it to Asia. After trying to kill Bond, after he sets fire to the base Sanchez has been making his cocaine fuel in, Sanchez flees with his petrol tankers of drugs and a fight ensues on top of one. A petrol drenched Sanchez is about to finish Bond off when Bond produces his gift for being best man - a lighter!

The fact that this mission was personal, full of hatred and revenge, really seemed to put off an audience that had grown to love funny or sexy Bond but, if you actually think about it, a guy with that much killing in his life? It's not a big stretch to imagine he'd use his skills to right a wrong is it? I liked License to Kill, not as much as The Living Daylights, but I enjoyed seeing a side of Bond not really covered before. Lazenby was the last actor to try something new with Bond and he lasted one film so I suppose I should consider myself lucky that Dalton got two outings. I know licence issues delayed any other potential Dalton film but after a return to smarmy, sexually driven drivel with Remington Steele, sorry Pierce Brosnan, Daniel Craig is heralded as a genius for changing the face of the Bond franchise? He didn't reboot Bond no matter what you think. He produced a sequel to Dalton. A decision that should have been stuck with in the beginning.