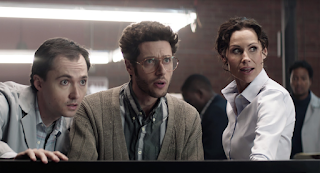 Susan Omand digs out her stethoscope to find the beating heart of the short film Laboratory Conditions...

This film needs to be turned into a full length psychological horror movie.

However, to be honest, it already feels like a high budget feature film and not just because it has stars of the calibre of Marisa Tomei and Minnie Driver but also because the concept and execution of the film is incredible.

What happens after we die has long been a subject for exploration in films. There are ghost stories aplenty to attest to that, but this is so much more than your average haunting. With shades of Flatliners, this short film takes what happens at the specific time of death to a whole new level of scientific experimentation and the existence of an unauthorised lab which basically abducts patients from hospitals just before the point of their death in order to monitor their passing is utterly believable. Part of that believability is, I think, down to the stars involved being consummate professionals. Often I find that, when known stars get involved in a short film, they either tend to be lack-lustre phoned-in appearances because it’s “just a short” or they have very little screen time and are just included to add “names” to the marketing campaign. Neither is the case here though and both leads give very strong performances worthy of their star status which impressed me a lot.

However, in order to give these performances, they needed a good creative team to guide them and both writer Terry Rossio and director Jocelyn Stamat definitely hit all their marks to deliver intense psychological drama with sparky dialogue and a superb finale which cut at exactly the right moment. I must also mention the great work by both set/props and FX designers as these are things that usually only get a mention when they’re noticeably bad and I wanted to give credit where it’s due. I have watched enough in the way of American police and hospital dramas to feel that the look of the locations was perfect and the special effects, especially those in the experimentation booth, worked really well.

For a short film to leave me at the end of 16 minutes feeling like I’ve watched a highly enjoyable feature film is commendable but to leave me still decidedly creeped out by “the ghost in the machine” several days later is something very special indeed.

Laboratory Conditions screens at Tribeca Film Festival on Friday, April 20th at 10 pm, Tuesday the 24th at 8:30 pm, Friday the 27th at 9:45 pm and Saturday the 28th at 9:30 pm. Find out more at https://www.tribecafilm.com/filmguide/laboratory-conditions-2018