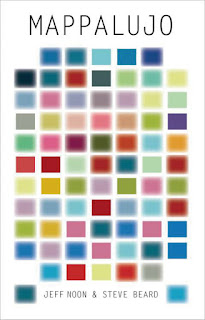 We're very excited here at /G-f to find out that the wonderful Jeff Noon has a new book coming out next year. Here's all the details...


The new science fiction imprint of award-winning Spectral Press, rEvolution SF, is proud to present the first title in its roster from none other than SF luminary Jeff Noon (whose 1993 novel Vurt announced a major new talent to the field), written in collaboration with Steve Beard. As well as being an exciting and visionary novel, Mappalujo also sets the tone and lays out the ambitions of the new imprint with a bold statement of high imagination. The novel will be available in all formats: limited signed hardback (75 only), unlimited paperback and unlimited eBook. It is currently on preorder from the Spectral Press website (details below).

Mappalujo is a shared dream set in the twilight realm of Lujo, a city dominated by the surreal cartoons and artificially bred toy creatures of the Zeno Entertainment Company. Since the company’s founder died in mysterious circumstances, Zeno’s visions have become darker and even more sinister. An identity-altering drug is leaking onto the streets. For a few brilliant, flickering moments users are transformed into famous or infamous celebrities, only to find that the other side of fame lies in the gutter, or in death.

The novel follows a lowly salesman, an information gatherer, a private detective and a teenage psychic. Four stories, four people – each of them connected to the bizarre fate of Zeno, its bitter heir, and a hostile faery spirit named Mama Lujo.

Here is one city’s epic tale told in seventy-five chapters, each influenced by a different iconic figure. From Lewis Carroll to Patti Smith, from Sigmund Freud to Raymond Chandler and Sophie Calle – the ghosts haunting the streets of Lujo are all conjured from the collective unconscious of the modern media age.

Mappalujo is baroque science fiction, tumbling with ideas and images, exuberant to the extreme. It documents a world only a few metres and a few minutes away from our own – yet stranger by far.

Jeff Noon was born in Manchester, England in 1957. He trained in the visual arts and drama and was active on the post-punk music scene before becoming a playwright. His play Woundings won a Mobil prize and was performed at the Royal Exchange Theatre in Manchester. His novels include Vurt (Arthur C. Clarke Award winner), Pollen, Automated Alice, Nymphomation, Needle in the Groove, Cobralingus and Falling Out Of Cars, Channel SK1N, and a collection of fifty avant-pulp stories called Pixel Juice. He also writes microfictional 'spores' via @jeffnoon on Twitter, and on Facebook. He lives in Brighton, on the south coast of England. More information can be found at jeffnoon.weebly.com.

Steve Beard was born in the South-East of England in 1961. He is the author of the weird science fiction novels Digital Leatherette and Meat Puppet Cabaret. He lives in Brighton.