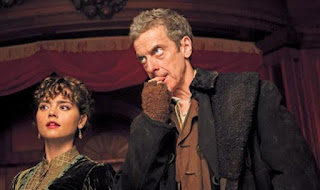 We look back at Series 8 ahead of series 9 premiere with our Who guru, Steve Hendry, who manages to attack most of the internet whilst producing the only comparison we have seen of Doctor Who to Eric Cantona...


Dearie me, the internet goes a bit daft after an episode of Doctor Who doesn’t it? I’m usually too busy getting the kids ready for bed to check in on Twitter after the closing credits, but as we’re still in the summer holidays and bedtimes are a bit later I thought I’d have a quick glimpse on Saturday night. I shan’t bother again, and I certainly didn’t log in to Gallifrey Base. I understand writers breaking their necks to be among the first to have their reviews of a new episode live online, but some of the hostility toward Deep Breath was astonishing. It’s almost as if some people want to be all controversial for the sake of it. What’s that you say, “maybe they genuinely didn’t enjoy it” or “maybe it wasn’t that good”? Well maybe, unlike me, they have appalling taste or are just plain wrong.

Now I’ve got that off my chest, we can take a deep breath (yes, I went there) and reflect on the majesty of Peter Capaldi’s extraordinarily brilliant debut. I have now watched seven Doctors’ opening stories at broadcast, and this beauty knocks even The Eleventh Hour into a cocked hat. I’m not going to be going synopsis-style on this season’s reviews, you’ll have read several of those by the time mine appear; so it’s all about me and my opinions, as nothing is more important than my megalomania. See, I’m already absorbing some of the brilliant dialogue from Deep Breath. Come on, you heard at least one line on Saturday and thought “I’m going to use that”. Steven Moffat is a magician, and writes two-handed scenes in particular absolutely expertly.

The intense, extended conversations between The Doctor and Clara in Mancini’s, Vastra and Clara in Vastra’s lounge, The Doctor and the clockwork leader aboard the skin zeppelin, The Doctor with Barney in the alley, Clara being examined by Nurse Strax and The Doctor(s) and Clara at the end were all monumentally good. Between Moffat’s words and Ben Wheatley’s sublimely skilful direction in these scenes, it’s going to be very difficult to go back to the 45-minute format next week. We’ve been spoiled with three longer than usual episodes in a row now, and I hope the beautifully measured pace of Deep Breath isn’t compromised for the rest of the series.

I wrote a piece about six weeks ago on here about how I didn’t think I could be more excited about Peter Capaldi’s first episode. How wrong you can be. I was in a right state on Saturday afternoon, and it is as well The Saturdays were this week’s guests on Tumble. The luscious chart-toppers settled me down and mesmerised me just as I was about to spontaneously combust like a Thames-trapped dinosaur, so thanks girls, if you’re reading. I sometimes wonder if I love Doctor Who a bit too much, and based on this first showing Capaldi is going to do nothing at all to alleviate this, he was perfect from his first “shush!”. The imbalanced post-regeneration Number Twelve stopped just short of Colin Baker’s violent neurosis, was as bonkers as Tom and had as much idea who he was and what was going on around him as Paul McGann after he woke up in a San Francisco mortuary. Perfect, then.

By the time he settled on his fourth costume of the episode, our hero was well and truly settled in to his new body and mind though, and really looks the part in that Crombie. I’ll be sporting my own mod’s coat this autumn, but I will have to try very hard to be anywhere near as cool as Capaldi.

I was in the cinema for Capaldi’s first appearance in Day of the Doctor, and I have never heard a roar in a picture house like the one that went up when his eyes filled the screen. Nummer Zwolf got in on Matt Smith’s biggest episode, so fair’s fair, up popped Matt on his debut. I thoroughly enjoyed this sequence, and Doctor Who does this kind of thing very well. I saw it described as “indulgent”, “unnecessary” and in various other negative ways on Twitter. The same was said about David Tennant’s farewell tour at the end of The End of Time part two, probably by the same people. They were wrong then, and they’re wrong now. The show is about time travel, for a kick-off, and why wouldn’t The Doctor do this kind of thing before he’s about to regenerate? The scene was beautifully played by Smith, Capaldi and the outstanding Jenna Coleman, and yes it was indulgent and unnecessary. But so what? It worked. Eric Cantona’s volleyed goal at Wimbledon in the FA Cup in 1994 was indulgent and unnecessary, he could have controlled the ball from Denis Irwin’s cross-field ball and played a team mate in for a tap-in. But by Christ, it was exhilarating, ambitious and made the hairs on my arms stand on end. I felt the same when The Doctor was on the phone to Clara and at the same time stood talking to her outside the TARDIS. Make no mistake, Steven Moffat is to Doctor Who what Cantona was to Manchester United. We will miss him when he packs it in, I still miss Eric now, 17 years on. The seagulls of Twitter are often following The Moff’s trawler, and just like King Eric used to, he just carries on being a genius, regardless.

Of course, where there is Moffat there is mystery, and ambiguity surrounds how old half-face came to be impaled atop Big Ben. Did he fall or did The Doctor tip him out of London’s creepiest restaurant? Either way, the same spike the Eleventh Doctor’s new knackers had a close encounter with in The Eleventh Hour made a kebab out of the clockwork villain of the piece. Newcomer Missy wasn’t sure how he ended up skewered either, and I’m not about to speculate on her real identity, there’s plenty of others going at that far too early I’m sure. If I was clever enough to work that one out after episode one, my surname would be Moffat. Roll on next Saturday, I hope Jenny Flint’s on Tumble.