** EXCLUSIVE ** Film Clip - The Beat Beneath My Feet 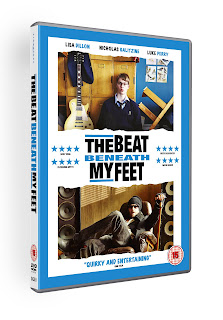 Our favourite indie film, and even favourite film ever, The Beat Beneath My Feet, gets a DVD and VOD release on Monday, and we have an EXCLUSIVE clip to share...

Scoop Films announces that its latest feature film The Beat Beneath My Feet, which features a stand-out performance from former Beverly Hills 90210 heartthrob Luke Perry, will be released on DVD and digital download and on video on demand in the UK on 20th July 2015.

The film will be available to buy from retail stores such as HMV and Amazon as well as digitally to rent or own from digital services such as iTunes, Amazon Instant Video and Blinkbox.

The Beat Beneath My Feet is a heartfelt comedy drama set in London, directed by John Williams in his first feature, and stars Luke Perry, Lisa Dillon and introduces newcomer Nicholas Galitzine.

Tom (Nicholas Galitzine) is a teenage loner with dreams of becoming a rock star, but he is thwarted by his God-fearing single mother, Mary (Lisa Dillon). His life takes a dramatic turn when an intimidating stranger moves into the flat below and plays loud rock music throughout the night. Tom recognises his new neighbour (Luke Perry) as Max Stone, an American guitarist who disappeared years earlier owing a fortune in unpaid tax and has been presumed dead. Tom agrees not to reveal Max to the authorities on condition that he teaches him the dark arts of rock guitar.

Find out more with Steve's review of the film and interview with the writer Michael Muller after you've watched the clip!